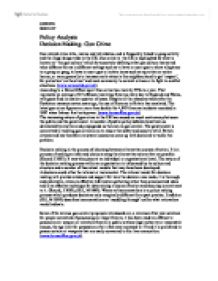 Gun related crime kills, maims and intimidates, and is frequently linked to gang activity and the illegal drugs trade in the UK. Gun crime in  the UK is highlighted by what is known as ‘ the gun culture’ which by accurately defining what gun culture means and takes different forms in different settings such as to have or use a gun to show allegiance to a group or gang, to have or use a gun to imitate icons such as rap artists or action heroes, or more generally to increase one’s status in the neighbourhood to get ‘respect’, for protection ‘on the street’ and most commonly to commit crimes or to fight in conflict situations. (www.connected.gov.uk)

According to a Home Office report Gun crime has risen by 35% in a year. That represents an average of 27 offences involving firearms every day in England and Wales, with guns fired in nearly a quarter of cases. Despite all the measures taken after the Dunblane massacre seven years ago, the use of firearms in Britain has escalated. The latest gun crime figures are more than double the 4,903 firearms incidents recorded in 1997 when Labour first took power. (www.homeoffice.gov.uk).

The increasing nature of gun crime in the UK has caused so much controversy between the public and the government. A number of public policy debates have been as dominated by emotion and propaganda as the one on gun control. The government is committed to tackling gun crime so as to ensure the safety and security of all British citizens and has therefore on several occasions come up with decisions to tackle the problem.

Decision making is the process of choosing between alternative courses of action. It is a process of making an informed choice among the alternative actions that are possible (Kourdi J 2003). It may take place at an individual or organisational level. The nature of the decision making process within an organisation is influenced by its culture and structure and a number of theoreticalmodels that may have been developed.

A decision could either be rational or incremental.The rational model for decision making will provide evidence and support for how the decision was made, it is thorough and systematic, relies on effective information gathering rather than preconceived ideas and is an effective technique for determining a course of action and securing commitment to it. (Kourdi, J 2003), (Hill, M 1993). Where as Incrementalism is a policy making process which produces decisions only marginally different from past practice. Lindblom (Hill, M 1993) describes incrementalism as ‘muddling through’ unlike what rationalism would indicate.

Some of the various gun control proposals introduced are; a minimum five year sentence for people convicted of possessing an illegal firearm, it has been made an offence to possess an air weapon or imitation firearm in public without legal authority or reasonable excuse, the age limit for possession of air rifles was increased to 17 and it is prohibited to posses certain air weapons that are easily converted to fire live ammunition. (www.homeoffice.gov.uk).

The government is set to improve technology for linking weapons to incidents as part of a three point plan to tackle gun crime by working with The National Ballistics Intelligence Database (NABID) an IT system designed to support the operation of the National Ballistics Intelligence Service by managing the recovery and examination of ballistic items, such as bullets, cartridges and weapons and, by linking to that information, tactical intelligence on people, objects, locations and events that occur throughout the country.

This includes the progress of examination and testing that takes place on the premises of identified forensic suppliers, such as the Forensic Science Service (FSS) and the Forensic Alliance (LGC Forensics). Consequently Senior Investigating Officers (SIOs) will be able to see at the touch of a button what information or intelligence is available relating to any ballistic items recovered as a part of their investigation. This information will facilitate fast time understanding of the intelligence to be gained in relation to any investigation and thus improve the investigative process.(www.west-midlands.police.uk)

This is meant to be in effect as from April 2008 as the Home Office plans to launch the NABID which will replace the current £1.1m National Firearms Forensic Intelligence Database (NFFID), launched in 2002. (www.homeoffice.gov.uk). A Home Office spokesperson told BBCNews: "The new system is an improved version of NFFID. The spokesperson said NFFID is being shelved because it is "too expensive" for police forces to commission information. "The new system will be cheaper because it will be owned and operated by the police. It will also give a more complete picture."(www.bbc.co.uk)

As noted, all the above are remarkable decisions made by the government in a bid to tackle gun crime. There is no single solution to gun crime and it such a complex issue to depend on one particular model in decision making. Because of the nature of the crime the government has embarked on both rational and incremental decision making so as to find the quickest and toughest measures in curbing down gun crime. Together with different communities and organisations the government has involved ex-offenders, parents and relatives of victims and offenders, witness and other members of society to identify the problem which is one of the crucial steps whilst making a rational decision.

The office of National Statistics and the Home office carry out annual report s which provides facts and figures of on going crime. These are used by the government not only to estimate the increase in crime but provide a way forward of how to deal with the crime and what measures to take. Rational decision makingrelies on effective information gathering rather than preconceived ideas which is an effective technique for determining a course of action and securing commitment to it. (Hill, M 1993)

Using the NABID was a rational decision as this called for looking at the costs and benefits and was compared to how well a similar system has worked. According to the report the new system will be cheaper because it will be owned and operated by the police; it will also give a more complete picture. This means that the government has clearly assessed the benefits and weighed the outcomes. However that does not entirely mean that the government has it right on target as rationalism has been criticised for being impractical (Hill M, 1993), even with the aid of computer technology a review and evaluation of all possible answers to a problem in order to select the optimal solution is rarely convincing and the cost of the search may well exceed the savings achieved by the solution eventually discovered. (Birkland T, 2001)

Conversely in comparison, the government has embarked on decisions and policies that are currently in force. Using The National Ballistics Intelligence Database (NABID) and the ANPR are all not new ideologies. Incrementalism allows continuous and reciprocal relationship between means and ends (Hill, M 1997). This therefore means that only a rather restricted number of the policy alternatives are reviewed and a limited number of consequences are envisaged and evaluated.

As noted earlier that the nature of the crime does not give much opportunity to making decisions that are fully comprehendible and justifying.
One of the immediate decisions made by the government after the fatal shooting of 11-yearold Rhys Jones in Liverpool was to toughen punishment for the offenders and any one found in possession of fire arms. Ideally at first thought this is a brilliant decision but given much thought this is typical incrementalism as the decision appears manageable and not an ideal goal; Lindblom (Hill M, 1993) explains that in this case ‘the problem’ is subject to redefinition in the light of available means to solve it.
In actual sense it’s not a new idea, it’s an ideology that is merely being revisited and at this point decision making entails considering only the incremental change or changes at margins.                         (Birkland T, 2001). This has not won any favors for the model as its accused of being conservative in that it copes with remedial and short term change and reinforces inertia. (Hill, M 1997)

On the whole there is no perfect and exact ideology, as it’s argued that both models are appropriate in decision making. Incrementalism performs an explanatory function whilst rationalism is largely confined to a perspective role. However, most of Britain’s policies seem to bend towards incrementalism. Considering the fragmented British political structure there is no formal concentration of power problems; they are rarely solved conclusively as noted the gun crime agenda.

Most major decisions involve taking on board the views of a range of people and decisions are re-interpreted through each site or agency of decision making. For example, Government departments like the Metropolitan police.

Its worth noting that the government has significantly endeavored in solving gun crime much as there is still doubt and question to why there are still incidents occurring. Commitment is still needed from every individual, every community and every public service and branch of Government to tackle both the causes and the consequences of gun crime.Successful interventions range from narrowly focused local initiatives to changes to national legislation. Knowing what is happening at the local, regional and national level is a vital first step, so as to identify gaps in provision or policy, and examples of good practice. Decision making does not entirely solve the problem but merely contributes to policy analysis and therefore it will require collaboration between sectors, between organisations and individuals, and between policy makers, professionals, practitioners and local people as there is no single solution, but progress can be made if society captures and shares that diversity of experience.

Birkland A Thomas. 2001 An Introduction to the Policy Process. Putting it all together: Models of the policy process. Pg 194M. E Sharpe.