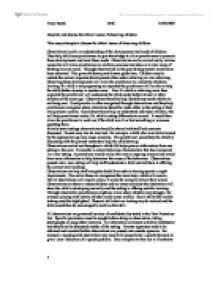 Describe and discuss the ethical issues of observing children

Describe and discuss the ethical issues of observing children. This essay attempts to discuss the ethical issues of observing children. Observations lead to an understanding of the development and needs of children. They help child care practitioners to gain knowledge to allow practitioners to promote these developments and meet these needs. Observations can be carried out by various means but will allow practitioners to confirm preconceived ideas or to alter ways of thinking in some areas. Through observations in the past developmental norms have been observed. This gives childcare practitioners guidelines. Children may be outside the normal expected development either under achieving or over achieving. Observing these developments will allow the practitioner to amend the childrens learning. If a child is not progressing as expected the practitioner will be able to help the child further develop in weaker areas. Also if a child is achieving more than expected the practitioner will understand the child needs further stimuli to other children of the same age. Observations therefore help identify any needs which are not being met. Good practice is often recognised through observations and they help practitioners recognise where alterations should be made either in the setting or their own personal actions. ...read more.

Parents signatures need to be obtained and recorded before observations are passed onto outside agencies. For example a taped speech observation may need to be passed onto a speech therapist to give a clear indication of a speech problem. One exception to this rule is if concerns were raised over neglect or abuse when this information could be passed onto a child welfare team. Information collected about the children should be kept in a secure place. Computer files must be made secure by using passwords. Observations made by students should not contain full names or photographs unless specific permission has been sought. Some observations are made using photographic and video evidence, or sound recordings may be made, prior permission from the parent or carer must be gained before using these types of observations. When carrying out an observation it is important not to get involved with the activity or to influence the childs behaviour. If possible do not let the child know they are being observed as this could alter their normal behaviour pattern. Observations should show awareness of ethical backgrounds such as religion. For example some children will not make eye contact with an adult. This could be interpreted as low self esteem where in actual fact the child is encouraged at home not to do this, as it is seen as disrespectful in their religion. ...read more.

I have made this mistake myself. A few years ago I worked with a boy with severe behavioural problems. This year his younger brother is in the class I work in. I wrongly assumed the brother would have the same behavioural issues that his older brother had. In this case I was very wrong as the younger brother had no behavioural problems. This has helped me to stop making assumptions about children and generalising about behaviour. This is a form of stereotyping to think about when making observations. Another form of stereotyping is for example thinking of a two year old as in the terrible twos, all children are individual and should not be labelled with stereotypical ideas. Practitioners have a duty to make observations accurately and clearly, whether or not such observations agree with our previous assumptions. It is vital not to jump to conclusions or guess why children respond in a certain way. To conclude always use observations for the benefit of the children, and to develop good practice in the workplace. Keep observations up to date and regular. Ensure confidentiality is respected and files are kept secure. Ensure observations are carried out without assumptions and allow for cultural differences. Never let racial or sexist attitudes affect the observations made. Ref A practical guide to child observation - Christine Hobart , Jill Frankel ?? ?? ?? ?? Tracy Booth HNC 07/05/2007 1 ...read more.