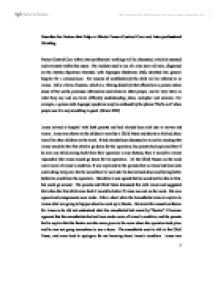 Describe the Factors that Help or Hinder Person-Centred Care and Inter-professional Working Person Centred Care within inter-professional workings will be discussed, critically assessed and evaluated within this essay. The incident used is one of a nine year old male, diagnosed on the Autistic Spectrum Disorder, with Aspergers Syndrome (AS), admitted into general hospital for a circumcision. For reasons of confidentiality the child will be referred to as James. AS is a form of autism, which is a lifelong disability that affects how a person makes sense of the world, processes information and relates to other people, can be very literal in what they say and can have difficulty understanding jokes, metaphor and sarcasm. For example, a person with Asperger syndrome may be confused by the phrase 'That's cool' when people use it to say something is good. (Brasic 2001) James arrived at hospital with both parents and had already been sick due to nerves and worry. James was shown to the children's ward by a Child Nurse and shown to his bed; there were five other children on the ward. It had already been discussed at an earlier meeting that James would be the first child to go down for the operation; his parents had explained that if he saw any child coming back from their operation in any distress, then it would be almost impossible that James would go down for his operation. All the Child Nurses on the ward were aware of James's condition. It was explained to the parents that as James had been sick and looking very pale, that he would have to wait until he had calmed down and feeling better before he could have the operation. Therefore it was agreed that he would not be able to first, but could go second. The parents and Child Nurse discussed this with James and suggested that when the first child came back it would be better if James was not on the ward - this was agreed and arrangements were made. ...read more.

The service user should be at the core of the plan, be consulted and have their views taken into account. It should include all aspects of care, including; Social Services, Health, family and voluntary sector. (http://www.cpa.org.uk) An example of Person Centred Care was evident when the Child Nurse discussed with James about being the second patient to theatre for the operation. Rather than just talking to the parents the child was included into the discussion and his feelings, needs and opinions were taken into account and acted on. Until The Children's Act of 1989, children didn't really have individual rights, and any decisions or action taken were made by discussion with their parents, completely bypassing the child's feelings and thoughts, which meant that decisions could be made about what was best for the child without having to consider the wishes or opinions of the child. Children were seen as the property of their parents and the overriding philosophy was one of parental rights and responsibility, instead of the rights of the child (Kay 2001). The Children Act 1989 was updated and replaced with The Children Act 2004. The Act also shapes the policies and procedures of any organisation or individual who works with children. It was introduced because previously the laws relating to children were often disjointed, out of date and particularly difficult to put into practice (Mullally, 1994). The Children Act 1989 was brought in to consolidate the law for the definitive benefit of children and this is compatible with the concept of Person Centred Care. The Act recognises the right of children to contribute to decisions about their own welfare, depending on age and understanding, and gives children a voice when decisions are made about them. When involving a child in decisions about their welfare and health, age and understanding have to be taken into consideration. The term Gillick competent is used to describe a child under the age of 16 who has "Sufficient understanding and intelligence to be capable of making up their own mind on the matter requiring decision" (Smith, 1996). ...read more.