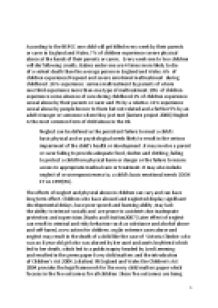 Describe the legislation that promotes the protection of children.

﻿According to the NSPCC one child will get killed every week by their parents or carer in England and Wales.7 % of children experience severe physical abuse at the hands of their parents or carers. Every week one to two children will die following cruelty. Babies under one are 4 times more likely to die of a violent death than the average person in England and Wales. 6% of children experience frequent and severe emotional maltreatment during childhood .16 % experience serious maltreatment by parents of whom one third experience more than one type of maltreatment.18% of children experience some absence of care during childhood.1% of children experience sexual abuse by their parents or carer and 3% by a relative .11% experience sexual abuse by people known to them but not related and a further 5% by an adult stranger or someone whom they just met [lantern project 2008] Neglect is the most common form of child abuse in the Uk. Neglect can be defined as the persistent failure to meet a child?s basic physical and or psychological needs likely to result in the serious impairment of the child?s health or development .it may involve a parent or carer failing to provide adequate food ,shelter and clothing ,failing to protect a child from physical harm or danger or the failure to insure access to appropriate medical care or treatment .It may also include neglect of or unresponsiveness to, a child?s basic emotional needs [DOH ET AL 1999]P6]. ...read more.

moral panic about children as perpetrators of crime led to the government introducing The Crime and Disorders Act 1998 .The Misspent youth reported that the legislation at that time relating to young people who offend were was inefficient ,uneconomic as it cost 1billion per year and ineffective. It also proposed that court processes be speeded up persistent offenders be more closely monitored, programmes involving victims and addressing offending behaviour be used as an alternative to the court process, parenting programmes, structured education for under five, support for dealing for teachers with badly behaving pupils and positive leisure opportunities to be developed and evaluated . the report also recommended that there should be better information sharing ,and local authorities ,should lead,multi agency work?? (yjb1)The white paper No more excuses proposed that a clear strategy to prevent offending and re offending ,parents and offenders should take responsibility for and face up ,up to offending behaviour earlier and more effective interventions when young people offend, final warning?s instead of repeat cautions ,new action plan ,reparations and parenting orders faster more efficient procedures from arrest to sentence and reform of youth court procedures a new national network of of youth offending teams providing programmes to stop offending behaviour (yjb2) .The Crime and Disorder Act 1998 received royal ascent in July 1998.This was widely praised at the time it came out .Section 37 of the Act establishes that preventing offending by children and young people ...read more.

plans were 7 to 10 % lower than 1997 but with higher tariff persistent offender?s there was no difference in re-conviction rate .Young offenders are dealt with more quickly .The audit also found that young offenders were less likely to offend while on bail in 1994 1 in 3 offenders committed a crime while on bail in 2003 it was 1 In 5.The report found that ISSPs were more constructive and cost effective option for persistent young offenders than time in custody for 6 months cost 25 400 and ISSP for 6 months cost8 500.However in 2004 a report by Oxford university on ISSP found that 85% reconvicted 12 months after starting .The report ten years of labour justice reforms :an independent audit centre for crime and justice found that the YJB achievement in in reducing crime is at best mixed ??(p7) and that there has been little difference in offending by young people since 1997.Initially the government claimed that had achieved a reduction of reconviction by 22.2% against the 5% target but was later changed to 7.7% however doubts were raised by criminologist Anthony Bottoms and James Dignan about the methods used .An investigation by the Home Office revealed the actual figure was only 2.4% If the crime and disorder act was removed there would be less young people in juvenile custody .UK would be in compliance with the uncrc there would be less violation of human rights . ...read more.