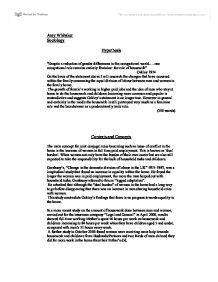 Despite a reduction of gender differences in the occupational world.... one occupational role remains entirely feminine: the role of housewife&quot;

Amy Whitaker Sociology Hypothesis "Despite a reduction of gender differences in the occupational world.... one occupational role remains entirely feminine: the role of housewife" Oakley 1974 On the basis of the statement above I will research the changes that have occurred within the family concerning the equal division of labour between men and women in the family home. The growth of female's working in higher paid jobs and the idea of men who stay at home to do the housework and childcare becoming more common and popular is contradictive and suggests Oakley's statement is no longer true. However in general and certainly in the media the housewife is still portrayed very much as a feminine role and the breadwinner as a predominantly male role. (110 words) Contexts and Concepts The main concept for joint conjugal roles becoming such an issue of conflict in the home is the increase of women in full time paid employment. This is known as 'dual burden'. When women not only have the burden of their own career but are also still expected to take the responsibility for the bulk of household tasks and childcare. ...read more.

This method will be suitable for the research I need and will produce qualitative information about the difference in hours spent on domestic labour between men and women. The reason I have chosen time budgeting as my method of research is that over ordinary questionnaires or one to one discussions, similar to how Oakley obtained research for her study in 1974, the respondent has got a longer time limit to obtain the research and will be more likely to fill out more reliable information as they have longer to consider their answers and can fill them out in their own time. This type of diary will also prove more systematic as it is specifically aimed to produce the research needed. My study will consist of ten households, although this is quite a small scale it will still give an insight into how the domestic roles of men and women have changed. As my study is of such small scale I will use families that are all in similar situations, the requirements of each household will be: * Typical nuclear family- Two parents (one Mother/one Father) ...read more.

They will know their answers will be used for research and this may influence them to change their diary to match the ideological couple, for example men may add or even do more household chores just while doing the time budgeting diary because they want to appear as a 'new man'. The time budgeting method itself could pose problems as even though it can be filled in at the participant's leisure they may rush to fill it in and may miss out tasks they have done throughout the day or mot fill in their true opinions. Also the week the time budget is carried out could be an untypical week for the family and for one reason or another their results might not be accurate compared to a 'normal' week. The sample itself is also a potential problem, as it is quite small it would be difficult to generalize from the results particularly to represent the whole population. As characteristics of the family such as, age, religion, occupation and ethnic origin wouldn't be accounted for. The class of the family could also make the results unreliable especially as previous research suggests middle class couples share the most equal roles concerning housework and work. (280 words) ...read more.