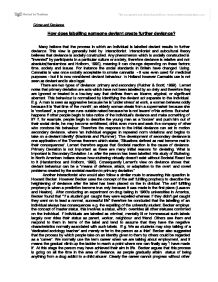 Deviance. How does labelling someone deviant create further deviance?

How does labelling someone deviant create further deviance? Many believe that the process in which an individual is labelled deviant results to further deviance. This view is generally held by Interactionist. Interactionist and subcultural theory believes that deviance is socially constructed. Any phenomenon which is socially constructed is "invented" by participants in a particular culture or society, therefore deviance is relative and not absolute(Haralambos and Holborn, 1995), meaning it can change depending on these factors; time, society and issues. For instance the social standards in Britain have changed. Using Cannabis is was once socially acceptable to smoke cannabis - it was even used for medicinal purposes - but it is now considered deviant behaviour. In Holland however Cannabis use is not seen as deviant and is also legal. There are two types of deviance: primary and secondary (Fulcher & Scott, 1999). Lemert notes that primary deviation are acts which have not been labelled by society and therefore they are ignored or treated in a low-key way that defines them as bizarre, atypical, or significant aberrant. ...read more.

Consequently Lemert's view on deviance shows that deviant behaviour can be a "means of defence, attack, or adaptation to the overt and covert problems created by the societal reaction to primary deviation." Another interactionist who would also follow a similar route to answering this question is Howard Becker. However Becker uses the concept of the self fulfilling prophecy to describe the heightening of deviance after the label has been placed on the individual. The self fulfilling prophecy is when a prediction become true only because it was made in the first place (Lawson and Heaton). After conducting an experiment on drug taking in 1960's universities in America, Becker found that ''If a student got caught they were expelled whereas If they didn't get caught they went on to lead a normal, successful life'' therefore he concluded that the labelling of an individual always has consequences e.g. the expelling of the university student. ...read more.

Becker put forward the stages in which he believed labelling took place. Firstly the individual is publicly labelled as deviant. This may lead to a rejection from many social groups. Regarded as a Junkie, a 'queer' a 'nutter' a 'wino' or a 'tearaway' he or she may be rejected by family and friends, lose his or her job and be forced out of the neighbourhood. This may encourage further deviance. For example, drug addicts may turn to crime to support their habit since 'respectable employers' refuse to give them a job.The official treatment of deviance may have similar effects. Ex cons may have difficulty in finding employment and be forced to return to crime for their livelihood. Becker argues that the treatment of deviants denies them ordinary means of carrying on the routines of everyday life, open to most people. Because of this denial, the deviant must of necessity develop illegitimate routines. The deviant career is completed when individuals join an organised group. In this context they confirm and accept their deviant identity. Others surround them in a similar situation that provides them with support and understanding. ...read more.