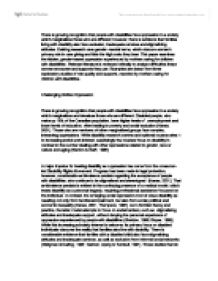 There is growing recognition that people with disabilities face oppression in a society which marginalizes those who are different; however, there is evidence that families living with disability also face exclusion, inadequate services and stigmatizing attitudes. Existing research uses gender-neutral terms, which obscure women's primary role in care giving and hide the high costs they bear. This paper examines the hidden, gender-based oppression experienced by mothers caring for children with disabilities. Relevant literature is reviewed critically to analyse difficulties these women encounter and supports they use. Examples are drawn from three exploratory studies of role quality and supports, reported by mothers caring for children with disabilities. Challenging Hidden Oppression There is growing recognition that people with disabilities face oppression in a society which marginalizes and devalues those who are different. Disabled people, who make up 16% of the Canadian population, have higher levels of unemployment and lower levels of education, often leading to poverty and social exclusion (Hanes, 2001). Those who are members of other marginalised groups face complex, interacting oppressions. While disability research centres and optional courses attest to increasing social work interest, surprisingly few courses focus on disability in contrast to the number dealing with other oppressions related to gender, race or culture and aging (Stanton & Swift, 1996). A major impetus for treating disability as oppression has come from the consumer-led Disability Rights Movement. Progress has been made in legal protection; however, considerable ambivalence persists regarding the acceptance of people with disabilities, who continue to be stigmatised and stereotyped (Hanes, 2001). That ambivalence persists is evident in the continuing presence of a medical model, which treats disability as a personal tragedy, requiring professional assistance focussed on the individual. In contrast, the emerging social oppression model views disability as resulting not only from functional impairment, but also from social, political and economic inequality (Hanes, 2001, Thompson, 1997). As in feminist theory and practice, the latter model attempts to focus on social barriers, such as stigmatising attitudes and inadequate support, without denying the personal experience of oppression experienced by people with disabilities (Sheldon, 1999; Sloper, 1999). ...read more.

These children with their families have an ambiguous status, which impedes their acceptance in both the mainstream and disabled communities (Fewell, 1990). When behaviour problems do occur, both mother and child are blamed , due to public misunderstanding about these disabilities. Attention Deficit Hyperactivity Disorder (ADHD) is a case in point, as it usually involves behaviour and social problems which can alienate teachers and peers (Harvey 1998, Dane 1990), yet it is poorly understood by both the public and many professionals. Misleading media representations of ADHD has led to the public to question whether it really is a disability, despite clear evidence of its biological origin and its enormous impact on children and their families (Bernier & Siegel, 1994).. This public debate has even penetrated some scholarly circles (see Lloyd & Norris, 1999), displacing emphasis away from consumer priorities such as community and professional support. This obliges mothers to educate scholars, professionals and a doubting public, in addition to coping with a difficult child, fighting for needed resources and resisting the personal impact of constant community blame (Sloman & Konstantareas, 1990). While relatively few studies examine family or environmental factors, (Boyce et al, 1995), there is evidence that stress increases when adverse conditions accumulate (Meyers, Lukemeyers & Smeeding, 1998). All families whose children have disabilities face vastly increased costs, as many needed services (such as assessment, treatment, equipment) are either not covered or strictly rationed under public health policies (Sloper, 1999). Inadequate income is a major source of anxiety (Sloper, 1999; Canning et al, 1996), as it restricts access to scarce resources, especially for increasing numbers of mothers in precarious employment situations, which offer no extra health benefits (Krauskopf & Akabas, 1998). Families with more than one exceptional child face increased material hardship and housing instability (Meyers et al, 1998). The higher stress reported by single mothers disappears once age, education and income are controlled, suggesting that their added difficulties are primarily due to economic inequality (Boyce et al, 1995). ...read more.

When the mother approached the mainstream ski school, she was told it might not be appropriate. It took the intervention of an instructor for the disabled, who had given the boy a private lesson and who was himself the father of a visually disabled child, to gain admittance to the adapted programme. As found in Anthony & Foster's (2001) focus group study of parents of children with ADHD, the burden was eased when someone understood how difficult this family's life was and made an effort to collaborate with the parents. Conclusion and Implications Findings from these recent exploratory studies illustrate some complexities of the oppression experienced by mothers of children with disabilities. As suggested in some writings, these mothers felt obliged to make personal, economic and career sacrifices in the face of societal rejection and lack of support. However, their gender-based oppression often seemed hidden even from themselves, perhaps because the impact of disability is minimised by families "if it only limits the mother" (Traustadottir, 1991, 223). In addition, professionals and the community may still be taking mothers' constant availability for granted, while holding them responsible for conditions they cannot control. Helping these mothers feel competent and giving them real options will require profound changes in attitudes, policies and resources. Community education is needed, to ensure inclusiveness policies are enforced consistently across all disabilities and to promote tolerance of difference. Examination of existing policies is another necessary step, to analyse their benefits for different disability groups and to identify the role conservative ideologies play in restricting access to needed resources. Professional education needs to include obligatory content on disability and its impact on families, taking into account the complex ways it interacts with other oppressions. Finally, further research needs to be done to make these mothers` hidden oppression more visible, including action-research designed to promote social change. However, it is clear that this is a complex issue, because of public ambivalence and governmental priorities related to control of public spending. Social workers need to join mothers in their struggle to move this issue higher on the public agenda. ...read more.