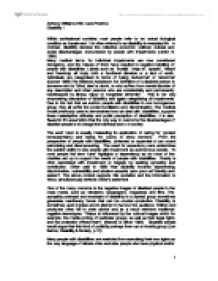 Within professional societies most people refer to an actual biological condition as impairment. It is often referred to as disability in everyday life.  In contrast, disability denotes the collective economic, political, cultural and social disadvantages encountered by people with impairments (Linton S, 1994).

Many medical terms for individual impairments are now considered derogatory, and the misuse of them have resulted in negative labelling of people with disabilities. Labels such as; ‘invalid’, ‘cripple’, ‘spastic’, ‘retard’ and ‘handicap all imply both a functional disvalue or a lack of worth.  Individuals are categorised in terms of being ‘subnormal’ or ‘abnormal’ (Quicke 1986).The National Assistance Act Definition of a disabled person is someone who is “blind, deaf or dumb, or who suffers from mental disorder of any description and other persons who are substantially and permanently handicapped by illness, injury or congenital deformity”.  This is not very empowering description of disability and again categorising all impairments. Due to the fact that we section people with disabilities in one homogenous group, they all suffer the social humiliation and discrimination. The medical model previously used to demonstrate how we deal with disabilities, supports these maladaptive attitudes and public perception of disabilities. It is also flawed in it’s assumption that the only way to overcome the disadvantages of disabled people is to change the individual and not society.

The word ‘care’ is equally misleading its application of caring for; (protect ion/supervision) and caring for; (worry or show concern).  From the perspective of people with disabilities, protected or supervised can sound patronising and disempowering.  The need for supervisory care undermines the publics’ ability to see people with impairment as autonomous people. To most people the term ‘care’ highlights a dependency as do most of the charities set up to support the needs of people with disabilities. Charity is often associated with impairment or tragedy by seeking sympathy and contribution. Oliver said in 1989 “that disability involves experiencing discrimination, vulnerability and abusive assaults upon your self identity and esteem”. The above content supports this quotation and the information to follow, simultaneously defends Oliver’s statement.

One of the many concerns is the negative images of disabled people in the mass media, such as: television, newspapers, magazines and films. The sympathy portrayal and emphasis of disability in a special group sometimes generates reactionary forces that can be counter-productive. Disability is sometimes used in jokes and in attempt to humour the audience. Editors and producers often fail to seek advice and as a result reinforce traditional negative stereotypes. “Status is influenced by the cultural images which for example, the media portray of particular groups, as well as their legal rights and the protection offered them”, (Barnes & Oliver 1995).  Disabled people would argue that this kind of publicity portrays them as a minority group (Len Barton, Disability & Society, p.12).

Many people with disabilities are restricted from exercising their own rights as the very language of debate often excludes people who have physical and/or sensory impairments or mental health problems. Having another person speaking for you, due to disability infringes on your human right to lead a self governing lifestyle. Removal of such barriers would make self determination possible. The government have developed a three stage model to the different ways of viewing citizenship and they are self-determination, participation and Contribution. People with disabilities face barriers to achieving all three of these elements. Where the government are concerned that certain groups within society are not fulfilling their roles as citizens they are diminishing the opportunity for people with disabilities to demonstrate their level of citizenship and undermining the rights of disabled people.

People with disabilities face discrimination from a flaw or loophole in the very legislation that is set up to protect them from discrimination; by permitting the rights of proprietors and businesses to make only ‘reasonable adjustments’ to tackle disabling barriers. Due to the ground of finances, conservation and practicality, disabled people receive less favourable treatment on the grounds of impairment (Howard, 2004, p.18 Disability Discrimination Act 1995). These barriers can be reflecting in the statistics published by the Disability Rights Commission in 2005, suggesting only half of disabled adults at working age are in employment, compared with four out of five non-disabled people in employment. The DDA 1995 was introduced to prevent people with disabilities from being discriminated on their rights to employment, housing and access to facilities or services. The stipulates adjustments required by employers but only for employers who employ 15 people or more and reasonable adjustments made by housing associations to provide access to housing. The Word ‘reasonable is open to a wide range of interpretation and private landlords can discriminate on the grounds that they can affords to make the adjustments required. Structures of the buildings do not need to be changed and an alternative access can be made. This is already treating disabled people differently on grounds of impairment and putting a price tag on their equality and disempowering people with impairments, Http:/194.202.202.185/dda/index.html.

The lack of support in necessary adjustments is a disability to people with impairments. The educational and training figures that were published in 2004 by the Department for Work and Pensions indicate that working age disabled adults are less likely to have level 2 qualifications and above than non-disabled adults. This could also lead to the transfer of learning as well as access barriers, as placing a group of individuals into a special needs class is not going to overcome all of the individual impairments and learning needs. Children with ADHD and dyslexia are often placed in special educations classes, without assessment of academic ability and their level of education is often diminished. It is evident the Disabled Persons Act 1986 has not fulfilled the objective of equalising work quotas.

During this topic it has been identified that people with disabilities still face participation barriers, inhibiting them to fully integrate into mainstream society to participate in family, community and national life. It does not suggest full equal opportunities and limits the social rights of a person with a disability.

Medical services alone are unable to empower a person with a disability to live independently in the community.  The provision of the correct equipment and amenities would empower the person to exercise more control over their life.  This can only be achieved by the person with the impairment deciding on the level of care that is provided and the equipment required for them to achieve self fulfilment. The Care Standards Act 2000 gives independence but not autonomy and again restricted by financial constraints. We often see fund raising schemes to raise money to purchase wheelchairs for children with multiple sclerosis and spasticity as the specialist equipment gives them the freedom of mobility with out high dependency. This equipment is not available through the welfare system; however we do pay £3,800+ per week for people to attend drug rehabilitation units to help them regain control of their lives. Doyal and Gough’s definition of autonomy is “to have the ability to make informed choices about what should be done and how to go about doing it” (Doyal and Gough, 1991, p.53).

It is also apparent that many people with mental impairments or learning difficulties do not receive equal access to primary health care, through the difficulties they experience with their illness. People with speech or other sensory impairments may also suggest that they do not get an equal health service due to the communication barriers set before them and their inability to communicate symptoms of illness. Stipulations listed in the Health and Social Care Act 2003 and the National Health Services Act 1976 do not make provisions for communications in sign language. They do however uphold your right to receive a service in welsh due to the Welsh Language Act.

Language barriers prevent people from merging with other social groups, confiding them to clubs and societies set up for them, intern creating social segregation.

One of the more recent battles that hit the news is the power of medical staff over people with disabilities. A recent case in the daily mail showed how the General Medical Guidelines 2002 gave medical staff the right to refuse artificial feeding for those who they perceive as having no quality of life. Therefore it is against the law for an individual to take his own his or her own life; however it is not for a medical consultant to make that decision for another person without their consent. By stopping the process of artificial feeding it will cause the patient to dehydrate and suffer malnutrition leading to death. This conflicts with article 2 of the Human Rights Act as an individual should not suffer degrading or in-human treatment. It takes away the right for an individual to die of natural causes (Daily Express, 27/02/2004, P.33).

The right to refuse life has also been extended to expectant mothers for children with even minor abnormalities such as a cleft lip or palate. Surgery can correct this problem and the individual could still lead a comfortable and successful existence. Mothers have aborted children after the six-month period because or minor disfigurements. Again this demonstrates the barriers and mentality with in society and the general discrimination against people with impairments/disabilities (David Paul, Sunday Express, 23/11/2003).

There is a clear failure to recognise the unequal power relations between those who are in control of the provision of services and the people with disabilities for whom these services are essential to maintain their personal independence.  A greater autonomy in the level of service required, type of service required and more control of the allocation of resources, should be given to the person with the impairment or disability.

It is clear to see that disabled people face direct and indirect discrimination by the system set up to protect them the provisions developed to support them and greater society.

Working with people with learning diabilities

An Introduction to Disability Studies

Produce an essay discussing and analysing how disability is perceived within the care setting and within wider society. Identify the impact of current legislation upon empowerment and current practice.