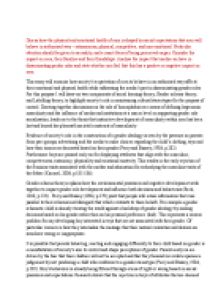 Discus how the physical and emotional health of men is shaped by social expectations that men will behave in authorised way autonomous, physical, competitive, and non-emotional

﻿Discus how the physical and emotional health of men is shaped by social expectations that men will behave in authorised way ? autonomous, physical, competitive, and non-emotional. Particular attention should be given to sexuality, and a man's fears of being perceived as gay. Consider the impact on men, their families and their friendships. Analyse the impact that media can have in disseminating gender roles and state whether you feel that this has a positive or negative impact on men. This essay will examine how society?s expectation of men to behave in an authorised way affects their emotional and physical health while addressing the media?s part in disseminating gender roles. For this purpose I will draw on two components of social learning theory, Gender schema theory; and Labelling theory, to highlight society?s role in maintaining cultural stereotypes for the purpose of control. Drawing together discussions on the role of homophobia as a means of defining hegemonic masculinity and the influence of media and institutions at a macro level on supporting gender role socialisation; leads me to the thesis that instinctive development of masculinity within men has been lost and buried deep beneath societal constructs of masculinity. Evidence of society?s role in the construction of a gender ideology is seen by the pressure on parents from peer groups, advertising and the media to make choices regarding the child?s clothing, toys and how their rooms are decorated based on their gender (Perry and Bussey, 1984, p.282). ...read more.

As a result the intimate bonds that developed between middle class men of that era were socially accepted within even the most conservative groups. The practise of sharing a bed with another male through childhood to early adulthood was common and widely accepted. Physical and verbal expressions of affection between men flowed freely without fear of retribution or reference to a lack of masculinity (Rotundo, 1993, p.85). These male relationships were seen as a trial run for marriage and supported the development of confidence regarding the opposite sex (ibid). These behaviours allowed for deep and trusting relationships in youth between men because society had not yet assigned them any labels by which to control them. The role of the media in the twentieth century in supporting hegemonic masculinity by portraying it against a backdrop of heterosexuality is significant (McCann et al, 2010, p506). The view that behaviours which stray from society?s heterosexual view of being a man are ?deviant? result in the labelling of homosexuality as the ?other? and signifies their part in assigning gender roles and hierarchies. This supports the view that mainstream culture will always label that which is different as ?deviant? in order to reaffirm its power. McCann (2006, p.225) highlights the role of sports in emulating what is socially acceptable masculinity as a means of controlling boy into sporting icons. ...read more.