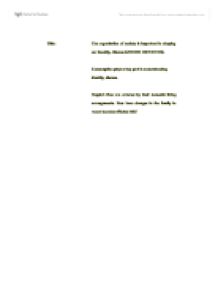 This eventually results in us shaping our identities because of the way we are with others and the way we have been treated in the past. We have been told off sociologist and psychologist how our identities are formed but where do they come from or where might they come from? The process of acquiring our identities can come from two possible paths: Sex role socialisation - This involves learning, modelling, rewarding, punishment and reinforcement. This is usually performed by parenting, socialism or other. Gender Rational Theories - This is when children start to develop their own gender identities and gender perception of others through the opposite sex, this usually occurs in nursery and primary school. The above helps us process our gender identities from a young age by acquiring the relevant information and guidance from experiences and knowledge. When we are young we process our gender identity by acquiring particular experiences and thoughts, but also environmental influences help us acquire our identities to some point. There are many environmental influences that can help understand a persons identity, it usually starts at a young age and then is changed as we get older. Family and friends perception of masculinity and femininity may affect the child at a young age and eventually have an effect on the child's opinions and views in the future. ...read more.

This could lead to the son growing up with feminine attributes which could cause identity problems in the future, the same goes for daughter living with fathers. Also certain living arrangements such as a male dominant family role where the father is in charge can have influence on gender role, if your young and you see a certain parent taking control you will use that perception in your gender identity which will create your own individual identity. Depending on a person living arrangement can change or influence a person's gender role because of the situation and experience undergoing, theses changes can be positive or negative. In conclusion to gender identities there are many different ways on how we acquire and adapt to certain gender roles and identities. It's most common that we learn from being young and experiencing and learning particular identities. Society also leaves it mark; society does play a big role in gender identity. Eving Goffman (1959), George Herbert Mead (1939) and Sigmund Freud (1923) show us how we create our own gender identities and how society plays a part but by this research and many more it does show that society and families are the key participants in acquiring as individuals are own gender identities. ...read more.