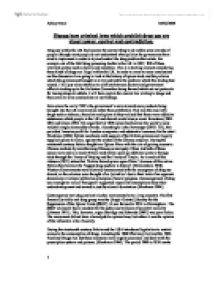 Discuss how criminal laws which prohibit drug use are about power, control and contradiction.

Discuss how criminal laws which prohibit drug use are about power, control and contradiction. Drug use within the UK has become the normal thing to do within some crowds of people although most people do not understand what policies the government have tried to implement in order to try and control the drug problem that exists. For example out of the 2640 drug poisoning deaths in the UK in 2007, 829 of these involved opiates such as heroin and morphine. This is a startling amount considering these kinds of drugs are illegal within the UK. In order to come to some conclusions on this discussion I am going to look at the history of opium trade and the policies which the government brought in to try and tackle the problem which this trading had caused. I will pay close attention to conflicts between doctors and government officials leading up to the Rolleston Committee being formed which set out protocols for issuing drugs to addicts. I will then explain the current law relating to drugs and then come to some conclusions on my findings. Even since the early 1700's the government's norm towards new products being brought into the UK was taxation rather than prohibition. This was the case with drugs such as tobacco, chocolate and opium as they realised that these were addictive substances which people in the UK and abroad would always want. Rowntree (1905: 285) and Owen (1934:52) argue that by 1839 opium had become the world's most valuable single commodity of trade. ...read more.

At this juncture, it appeared that an equally hard-line policy would be adopted in Britain. Transactions in cocaine were to be recorded so that they could be inspected by the Secretary of State; but importantly, the ability to check records on the use and supply of cocaine was extended to police officers of the rank of inspector and above. At this point though it is important to point out the question whether drug abuse is a medical or purely criminal justice problem. Three key establishment figures played an influential role in making drugs a criminal matter. Sir Malcolm Delevinge, Sir Edward Henry, and Sir Francis Lloyd. Delevinge and Henry pursued the drugs issue to consolidate their professional autonomy and to bring drugs under the jurisdiction of criminal law. As Metropolitan Police Commissioner, Henry saw drugs as a cause of crime and argued that drug users should be convicted. While Henry advocated prison for the drug consumer, he was opposed to sanctions against opium because it provided important trade revenue for the British Empire (Blackman 2004). Henry and Delevinge may have pursued prohibition policies, but Brian Inglis (1975) states that while 'the British Government was professing to be taking measures to reduce consumption of opium and hemp drugs, its agents in India were in fact busy pushing sales in order to increase the colonies revenue'. Parssinen (1983) argues it was Delevinge who drafted the original DORA document which became the basis of the Dangerous Drugs Act, 'as well as the 1921 regulations, with no prior consultations with medical men or pharmacists, much against the wishes of the Ministry of Health officials'. ...read more.

In 1971 the Misuse of Drugs Act was passed. It is often presented as little more than a list of proscribed drugs and of penalties linked to their possession and supply. In practice, however, the act establishes the Home Secretary as a key player in a drug licensing system. Therefore, for example, various opiates are available legally as prescription-only controlled drug medicines, and cannabis may be grown under license for 'industrial purposes' The contradictions underlying drug control policy are apparent in government involvement in the colonial drug trade; rather than being about the welfare of the drug user it seems that the policy changes in the early 1920s were more concerned with the profession which would have the ultimate power. Criminal laws as we can see with this discussion of drug policy are actually about power, control and contradiction. As Foucault (1984) argues 'the British System of drug control should not be understood in terms of science or medicine, but in terms of the pursuit of 'truth' and the power gained by the medical profession. Drugs as an area of discourse were subject to an 'economy of truth', in that certain types of knowledge become legitimate and self-reinforcing, irrespective of their value, they are supportive of the bourgeois economy and the professional classes'. Another important point to make is that it was the British government who have created this 'drug problem' themselves through becoming the biggest drug pushers in history. The fact that they made so much money from selling the opium to china meant that this blurred their perceptions on what was clearly becoming an issue. ...read more.