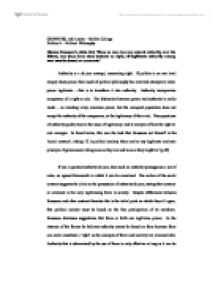 Discuss Rousseau's claim that 'Since no man has any natural authority over his fellows, and since force alone bestows no right, all legitimate authority among men must be based on covenants.'

GRIFFITHS; Jodi Louise - Halifax College Politics A - Political Philosophy Discuss Rousseau's claim that 'Since no man has any natural authority over his fellows, and since force alone bestows no right, all legitimate authority among men must be based on covenants.' Authority is a de jure concept, concerning right. If politics is on one level simply about power, then much of political philosophy has involved attempts to make power legitimate - that is to transform it into authority. Authority incorporates acceptance of a right to rule. The distinction between power and authority is easily made - an invading army exercises power, but the occupied population does not accept the authority of the conquerors, or the legitimacy of their rule. Thus questions of authority quickly turn to the issue of legitimacy, and to analysis of how the right to rule emerges. In broad terms, this was the task that Rousseau set himself in the 'social contract', asking 'if, in political society, there can be any legitimate and sure principle of government, taking men as they are and laws as they might be' (p.49) If one is granted authority de jure, then such an authority presupposes a set of rules, an agreed framework in which it can be exercised. The notion of the social contract supports the claim to the possession of authority de jure; stating that contract or covenant is the only legitimising force in society. ...read more.

Instead any contract or agreement entered in to should involve the enhancement of freedom. It is this feature of Rousseau's contract that beseeches the question, how can submitting to government enhance freedom? Rousseau endeavours to 'find a form of association which will defend the person and goods of each member with the collective force of all, and under which each individual, while uniting himself with others, obeys no-one but himself, and remains as free as before' (p.60). The solution to this conundrum is Rousseau's social contract where 'each one of us puts into the community his person and all his powers under the supreme direction of the general will; and as a body we incorporate every member as an indivisible part of the whole' (p.61). The people become a single unity with a will of it's own and a common purpose. In effect man gives up completely his natural liberty and in return receives civil liberty. By renouncing natural liberty we are giving up the ability to indulge our animal desires but in return we gain a civil liberty, something we aspire to as 'an intelligent being and a man' (p.65). When man has civil liberty he is truly free because this requires obedience to a law that is his own. Civil liberty is not giving in to impulsive desires but instead the being faithful to second order desires. ...read more.

With the conditions being equal for all, 'namely the total alienation by each associate of himself and all his rights to the whole community' (p.60) and because all freely accept them; in obeying the 'supreme direction of the general will' (p.61), the citizens are obeying themselves and this is truly freedom. The citizens commit themselves on the same conditions and must enjoy the same rights; sovereignty becomes the guarantor of freedom but Rousseau's account of freedom is paradoxical. Man has to understand that his view point is false and his real will is to be identified with the community as a whole, 'whoever refuses to obey the general will shall be compelled to do so by the whole of society, which means nothing less than he will be forced to be free' (p.64). How can it be legitimate to force someone to be free? Such a statement seems to advocate a form of totalitarianism but despite any dark undertones conjured from such a statement there is an inclination to be sympathetic. Rousseau presents us with a situation where we all participate in governing ourselves as one body, what else are we to do when, in society someone wishes to undermine a system so legitimately formed? Natural freedom cannot be granted to individuals who would use it in a manner as to undermine the civil freedom we encompass as a body politic. We cannot allow democratic freedom to destabilise democracy itself. ...read more.