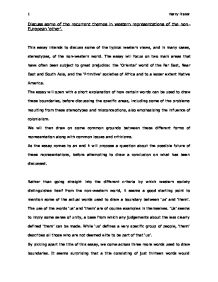 Discuss some of the recurrent themes in western representations of the non-European 'other'.

Discuss some of the recurrent themes in western representations of the non-European 'other'. This essay intends to discuss some of the typical western views, and in many cases, stereotypes, of the non-western world. The essay will focus on two main areas that have often been subject to great prejudice: the 'Oriental' world of the Far East, Near East and South Asia, and the 'Primitive' societies of Africa and to a lesser extent Native America. The essay will open with a short explanation of how certain words can be used to draw these boundaries, before discussing the specific areas, including some of the problems resulting from these stereotypes and misconceptions, also emphasising the influence of colonialism. We will then draw on some common grounds between these different forms of representation along with common issues and criticisms. As the essay comes to an end it will propose a question about the possible future of these representations, before attempting to draw a conclusion on what has been discussed. Rather than going straight into the different criteria by which western society distinguishes itself from the non-western world, it seems a good starting point to mention some of the actual words used to draw a boundary between 'us' and 'them'. The use of the words 'us' and 'them' are of course examples in themselves. 'Us' seems to imply some sense of unity, a base from which any judgements about the less clearly defined 'them' can be made. ...read more.

It is easy to formulate a picture of typically 'primitive' man in our minds, as we have all probably learned similar ideas of what it means to be primitive - it is when we apply this stereotype to societies around the world that we face a problem. Sadly, this has been the case for many, many people ever since the first interactions between the culturally different. Nederveen Pieterse quotes Debrunner, in his book 'White on Black3'; "The Negro represents natural man in all his wild and untamed nature. If you want to treat and understand him rightly, you must abstract all elements of respect and morality and sensitivity - there is nothing remotely humanized in the Negro's character... Nothing confirms this judgement more than reports of missionaries." (1992: 34). Reading such a paragraph will most likely lead to sheer disgust from the reader, and rightly so. The truth is though that such a view echoes that of many western views of the last several hundred years; that of the backwards, barely human, wild man. Nederveen Pieterse points out that many of these views are based on 'absences' - something deemed as lacking from these people that are requited to make them human. (1992: 35). Some views take the idea even further, believing that certain societies may have provided a 'missing link' between man and ape, as Nederveen Pieterse explains: "Edward Tyson proposed the pygmy, whom he identified with Homo Sylvestris, as the missing link." ...read more.

(Talal Asad, 1973: 25). In response to such a situation, I propose a question. Orientalism, like all western representations of the 'other', has always had a clear emphasis on power and control. With the modern world developing as it is - China fast becoming one of the world's main powers, with India to follow in the future, what effect will this have on western Oriental views? Is it possible that a shift in, or at least an expansion of, power bases would abolish such stereotypes in any way, or is it possible that our views of what the Orient is are so distant from reality that any such change would in fact leave our ill informed views intact? It seems fitting that an essay that originally intended to focus on the way the West represents the other actually focussed more on the universal criticisms of these representations - this is hardly a coincidence. What is clear from discussing these different representations of the 'other' we have is that while they may focus on very different locations, and completely different sets of misinterpretations, they all share some very common grounds - both in the way these representations are formed, and more importantly the way these representations are criticized and rejected. Therefore in conclusion, while there will always be different names given to the ways we may represent certain areas around the world, it is likely that there will always be one combined perceived 'other' that an ignorant westerner may apply very similar frameworks to, no matter how different they may actually be. ...read more.