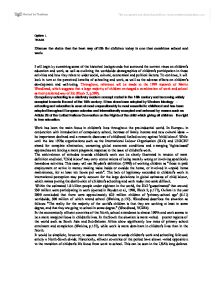 Discuss the claim that the best way of life for children today is one that combines school and work. Throughout, reference will be made to the 1999 research of Martin Woodhead, which suggests that a large majority of children envisaged a combination of wo

Option 1 TMA04 Discuss the claim that the best way of life for children today is one that combines school and work. I will begin by examining some of the historical backgrounds that surround the current views on children's education and work, as well as outlining the worldwide demographics of children's participation in these activities and how they relate to wider social, cultural, economical and political factors. To continue, it will look in turn at the perceived benefits of schooling and work, as well as the adverse effects on children's development and well-being. Throughout, reference will be made to the 1999 research of Martin Woodhead, which suggests that a large majority of children envisaged a combination of work and school as their preferred way of life (Block 2, p.209). Compulsory schooling is a relatively modern concept rooted in the 16th century and becoming widely accepted towards the end of the 19th century. It has since been adopted by Western ideology - schooling and education is seen almost unquestionably is most essential to childhood and has been adopted throughout European colonies and internationally accepted and enforced by means such as Article 28 of the United Nations Convention on the Rights of the child which giving all children the right to free education. ...read more.

Education may in consequence become repetitive, ritualistic and tedious for children; regarded by Hill and Little as 'the very antithesis of what many regard as a good education (1996, p.151). Mackinnon's field notes document five and six-year-old children in south India repeating phrases of a story in preparation for an exam which mainly tests their recollection of material learned in textbooks (1997, p.165). Sociologist Martin Woodhead (1999) gathered interviews from children in a number of countries in the South who combined both school and work about the good and bad points of both aspects of their lives. Concerning school, children cited the learning of literacy and numeracy, improved work prospects and peer relationships as the most positive experiences. Negative experiences at school included humiliation and abuse from teachers and peers, anxiety about poor achievement and feelings of tiredness and boredom. Some similar negative aspects of school are experienced by children in the North. Pupils may experience disaffection and alienation within the school system on ethnic, class or gender grounds, as well as through fear of unemployment and lack of life perspective. An example of such would be Antonio, a Hispanic-American living in Brooklyn, New York, who experiences school as 'dangerous and hostile' and has no future job aspirations (Block 2, p.134) ...read more.

through physical abuse by teachers or employers or holding back of pay, for example, or indirectly; through wider economic policies and practices, such as their exclusion from minimum wage legislation in many countries. Empowering children by seeking to make their voices heard through a rights-based approach may be one strategy in addressing this power imbalance. When and where children wish to combine school and work, efforts shall be undertaken to support their participation in these activities within a framework that is safe, transparent and fair, and western approaches to child labour issues should be adjusted to re-examine how to support children in a way that is mindful of the relative advantages of both activities. A vast majority of the children interviewed as part of Woodhead's research thought that a combination of both aspects was the 'best' for them. Work was perceived as the necessity, while school was considered more of a privilege in their current circumstances. In the North where it is not essential to the family economy for children to work, it still appears to be an important aspect in children's lives. The consensus in light of these facts suggests that children around the world actively seek to combine school and work given the choice. ...read more.