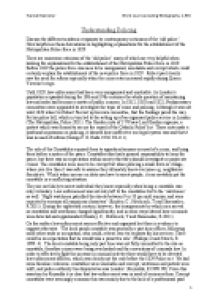 Discuss the different academic responses to contemporary criticisms of the old police. How helpful are these discussions in highlighting explanations for the establishment of the Metropolitan Police force in 1829.

﻿Hannah Bannister Word count excluding Bibliography- 1,965 Understanding Policing Discuss the different academic responses to contemporary criticisms of the ?old police?. How helpful are these discussions in highlighting explanations for the establishment of the Metropolitan Police force in 1829. There are numerous criticisms of the ?old police? many of which are very helpful when looking for explanations for the establishment of the Metropolitan Police force in 1829. Before 1829 the police force was seen to be unorganised, unreliable and corrupt which could certainly explain the establishment of the new police force in 1829. Robert peel clearly saw the need for reform especially when the crime rates increased rapidly during Queen Victoria?s reign. Until 1829, law enforcement had been very unorganised and unreliable. As London?s population expanded during the 18th and 19th centuries the whole question of maintaining law and order had become a matter of public concern. In 1812, 1818 and 1822, Parliamentary committees were appointed to investigate the topic of crime and policing. Although it was not until 1828 when Sir Robert Peel set up his own committee, that the findings paved the way for his police bill, which in turn led to the setting up of an organised police service in London (The Metropolitan, Police 2011). The Gordon riots of 1779 saw Lord Gordon organise, a protest which was formed to secure the repeal of the Catholic Relief Act. ...read more.

Peel saw that London had serious issues with the police force and fought to change the system that society could rely upon. Sir Robert Peel the Home Secretary eventually managed to pursude Parliament of the importance of a new police force for London so that rampant crime and disorder could be controlled. On the 19th June 1829 parliament passed The Metropolitan Police Act which came into force. The act 'made criminal offences of 'kite flying', knocking at doors without reasonable excuse' and 'hoop-rolling (The Metropolitan Police Act (1829: S.54), cited in, Mckenzie, I (1998). The era between 1674 and 1913 witnessed a major transformation of policing in London from a system that relied on volunteers and part-time constables, through the development of salaried officials and semi-official "thief-takers", to a modern professional police force. (Emsley, C , Hitchcock, T and Shoemaker, R 2011). Thief-takers used their knowledge of the criminal underworld to profit from both types of rewards. They negotiated between thieves and the victims of thefts to return stolen goods in exchange for a fee (Emsley, C , Hitchcock, T and Shoemaker, R 2011).?Thief-takers acquired an unsavoury reputation as theif makers, unscrupulous individuals who encouraged people to steal and then profited from collecting the rewards for their conviction? (Shoemaker, R 2004: 39). ...read more.