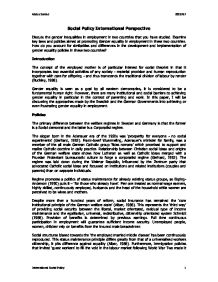 Discuss the gender inequalities in employment in two countries that you have studied.

Social Policy International Perspective Discuss the gender inequalities in employment in two countries that you have studied. Examine key laws and policies aimed at promoting Gender equality in employment in these two countries. How do you account for similarities and differences in the development and implementation of gender equality policies in these two countries? Introduction The concept of the employed mother is of particular interest for social theorist in that it incorporates two essential activities of any society - material provision and human reproduction together with care for offspring - and thus transcends the traditional division of labour by render (Buckley, 1988). Gender equality is seen as a goal by all western democracies, it is considered to be a fundamental human right. However, there are many institutional and social barriers to achieving gender equality in particular in the context of parenting and work. In this paper, I will be discussing the approaches made by the Swedish and the German Governments into achieving or even frustrating gender equality in employment. Policies The primary difference between the welfare regimes in Sweden and Germany is that the former is a Social democrat and the latter is a Corporatist regime. The slogan born in the Adenauer era of the 1950s was 'prosperity for everyone - no social experiments' (Gerhard, 1992). Franz-Josef Wuermeling, Adenauer's minister for family, was a member of the all male German Catholic group 'fides romana' which promised to support and realize Catholic doctrine in daily practice. Relationship between Christian social ideas and origins of the German welfare state shows how Lutheran as well as Catholic ideas merged with a Prussian Protestant bureaucratic culture to forge a corporatist regime (Gerhard, 1992). The regime was laid down during the Weimar Republic, influenced by the Zentrum party that advocated Catholic social ideas and focussed on institutions and related institutions (couples and parents) than on separate individuals. Regime promotes a politics of status maintenance for already existing status groups, as Esping-Anderson (1990) ...read more.

Sweden took the lead in terms of integrating women in gainful employment during the 1960's. The Government carried out major policy reform of parental leave. In 1974, leave was extended to six months, and fathers were granted statutory rights to leave. The argument in favour of the decision strongly emphasised that bridging family life and working life was, a problem for women, and integrating men in care responsibilities was decisive for achieving gender equality. Role of the father was subjected to increased politicisation that led to the formation of the 'daddy group' in 1982, followed by the implementation of the 'one month daddy leave' in 1994, leave was extended to two months in 2002. Daddy leave was framed as a means to change the so called 'in principle' attitude of men towards gender equality (Kamarmen, 2009). Right wing opponents framed the 'daddy leave' as a violation of the family's free choice. Home care allowance encouraged mothers to stay at home and care for young children, initially aimed at mothers, later legislation was couched in gender neutral rhetoric even though the take up rate by fathers was low. Some point to the temporary nature of the break from the labour market and the value to those mothers who would otherwise be unemployed (Salmi, 2006). Concerns were raised regarding women's long term labour market position and reinforced the gendered division of labour, particularly for less educated women in lower skilled jobs (Morgan and Zippel, 2003, OECD, 2005). Thus, the policies can also exacerbate class stratification. The significance of this for gender equality and women's citizenship is disputed (Salmi, 2006). Child Care Giving parents time off to care for children and reorganizing the working day to enable parents to achieve a 'work life balance' is essential in promoting women's employment. German Government implemented measures designed to enable parents to reconcile work and family life. Federal law gives all children between the age of three and six a right to a place in a kindergarten, but does not fully specify full time provision. ...read more.

Swedish Policy makers have appeared in the discrepancy between the strong rhetoric of gender equality and the gendered social practices. The policy logic has, above all, embraced a 'universal breadwinner model' but it failed to achieve a 'universal caregiver' model. The reforms of parental leave and the expansions of childcare provisions was a step towards a universal caregiver vision, this was taken with the adoption of the daddy month. Shared parenthood as a prerequisite for shared power between the genders gained a strong foothold in Swedish political discourse during the 1990's. Sweden is a relatively egalitarian society overall, the gender pay inequalities that result from occupational segregation do not translate into such wide economic inequalities as segregated labour markets do elsewhere. The embedded resistance of the gendered domestic division of labour to significant change means that the gender neutral policies seem to have more of an impact in inadvertently reinforcing the gendered division of labour (Lister, 2006). When it comes to equal pay, Germany has plenty of initiatives, regular protests and a anti-discrimination law. There is a relationship between the position of women as paid and unpaid workers, but in Germany, the Government had no real intention of addressing this relationship because it is located within the family and therefore this was seen as being beyond the remit of the government, furthermore, boundaries around the labour market was drawn more tightly. In the case of women, the effect was to increase their dependence on men. The German welfare system produces its own winners and losers. Female winners are those who manage to get married to a continuously employed man, to have a happy marriage and who are content with this lifestyle. In a capitalist society staying at home and living on a husband's income incorporates the likelihood of a restricted independence via personal dependence (Ostner, 1998). Though controversial, in order to really address inequalities, countries need to implement, quotas, gender mainstreaming programmes, positive discrimination policies, work life balance policies, greater female political representation in politics, initiatives that breaks downs gender segregation and further legislation to ensure inequalities is tackled. ...read more.