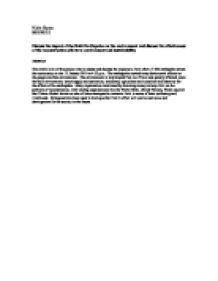 Nikita Hunter B00530512 Discuss the impact of the Haiti Earthquake on the environment and discuss the effectiveness of the reconstruction efforts to environment and sustainability Abstract The overall aim of this project was to assess and discuss the impacts to Haiti after a 7.0M earthquake struck the community on the 12 January 2010 at 4.53 p.m. The earthquake created many detrimental effects on the people and the environment. The environment in and around Port-Au-Prince was greatly affected, were the built environment, water supply and sanitation, woodland, agriculture and coastline and fisheries felt the effects of the earthquake. Many organisation intervened by donating money to help Haiti on the pathway of reconstruction, with leading organisations like the World Bank, United Nations, Water.org and the Clinton Global Initiative who all have attempted to maintain Haiti in terms of their wellbeing and livelihoods. Strategies have been used in the hope that Haiti's effort will lead to resilience and development for the society in the future. Haiti is located in the western hemisphere on the island of Hispaniola in the Caribbean region. The island of Hispaniola is made up of two separate countries, the Dominican Republic and Haiti (or also known as the Republic of Haiti). ...read more.

Due to the disruption of the capital city Haiti lacks decentralisation, leaving the country in a vulnerable way. Water There are many threats to the water quality and the abundance of it, due to lack of sanitation and the correct waste management were water has either become to contaminated and unsafe to drink or limited due to efficiency of donated aid reaching areas quick enough to those who need it the most. The lack of waste management has enabled water to be a vector for diseases, and in recent cases this has caused outbreaks of cholera. Water.org explain that in a disaster such as the earthquake in Haiti an earthquake can cause underground water and sanitation pipelines and concrete water storage tanks to be highly susceptible to damage by the earthquake and will likely need to be repaired or replaced. The earthquake caused this system to fail, and the progress of repairing and replacing this system is slow if not non-existent. Access to safe water and sanitation services are among one of the major impacts to Haiti. Woodland A lot of the woodland previous to the quake had already been subjected to the vast amounts of deforestation, and now the rest of which remains is used for the reconstruction of temporary shelter or sold to get money for the local people in the form of products like charcoal. ...read more.

FACTS/STATISTICS Affected schools: 4,992: 23% of all schools in Haiti Total number of learners affected: 1,093,415 Total number of learners deceased: 38,000 Total number of teachers affected: 55,793 Total numbers of education personnel deceased: 1,527 Percentage of primary schools reopened (according to school inspectors): Port au Prince: 80%, Leogane: 72%, Petit et Grand Goave: 100%, Jacmel: 100% Table 1: A table showing the impact on education in Haiti The U.S. response to the disaster includes providing 20,000 civilian and military personnel who supported key early efforts such as the largest urban food distribution in history to 3.5 million people; emergency shelter distribution to 1.5 million people; and a vaccination campaign for more than 1 million people. Many organisations just like the above that were stated have donated a tremendous amount of money to which will target many areas around Haiti that felt the impacts of the earthquake. Overall the efforts made to reconstruct Haiti have been crucial but progressive, although many organisations are collaborating and working for a better future for Haiti. Strategies should be correctly targeted and implemented in the success that Haiti will once again in the future be better facilitated and supported in any way possible in the future. Suggestions for the future/ key strategies * Access to water and sanitation services * For the Government of Haiti to create co-ordination and to maintain a strong economy and society. ...read more.