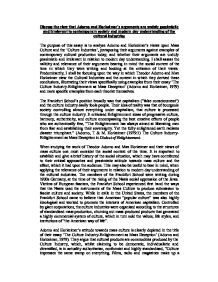 Discuss the view that Adorno and Horkeimer's arguments are unduly pessimistic and irrelevant to contemporary society and modern day understanding of the cultural industries The purpose of this essay is to analyse Adorno and Horkeimer's views upon Mass Culture and the 'Culture Industries', juxtaposing their arguments against examples of contemporary cultural production today, and whether their arguments are unduly pessimistic and irrelevant in relation to modern day understanding. I shall assess the validity and relevance of their arguments bearing in mind the social context of the time in which they were writing and looking at the criticism of their views. Predominantly, I shall be focusing upon the way in which Theodor Adorno and Max Horkeimer view the Cultural Industries and the context in which they derived these conclusions, illustrating their views specifically using examples from their essay 'The Culture Industry-Enlightenment as Mass Deception' (Adorno and Horkeimer, 1979) and more specific examples from each theorist themselves. The Frankfurt School's position broadly was that capitalism ("false consciousness") and the culture industry easily fools people. Their idea of reality was that of bourgeois society controlling almost everything under capitalism, that culture is processed through the culture industry. It criticised Enlightenment ideas of progressive culture, harmony, authenticity, and culture encompassing the best creative efforts of people who are authentically free, "The Enlightenment has always aimed at liberating men from fear and establishing their sovereignty. Yet the fully enlightened earth radiates disaster triumphant." (Adorno, T & M. Horkeimer (1979:1) The Culture Industry-Enlightenment as Mass Deception in Dialect of Enlightenment. When studying the work of Theodor Adorno and Max Horkeimer and their views of mass culture one must consider the social context of the time. It is important to establish and give a brief history of the social situation, which may have contributed to their critical approaches and pessimistic attitude towards mass culture and the effect, which it had upon the audience. ...read more.

It was Adorno's claim that what enlightenment was expected to bring about, that is pluralism and demythologization, turned out to be in fact the contrary. He believed that man is subject to conformity rather than choice, and that myth is still a predominant guide, although it has now taken a rather different guise as opposed to previous ages all absorbing Christianity. The underlying and most important assumption here, that Adorno makes, is that all things take place on the unconscious level. Man may appear free to think, but in reality he is not, "Freedom to choose an ideology - since ideology always reflects economic coercion - everywhere proves to be freedom to choose what is always the same" (Adorno and Horkeimer, 1979, pp. 166-167). He believed that if someone wants to object to the present order of the culture industry, the only way is through "realistic dissidence", which is in reality not a threat to the culture industry but rather reinforcement (p.132). Another important characteristic of Adorno's view of modernity and culture is his absolute disbelief in progress, that the trajectory of modern history is unequivocally makings its way to the worse. He firmly asserts that what gave rise to a certain protest against the establishment from Romanticism to Expressionism is no longer appreciated or acknowledged. Being a very keen art critic as previously mentioned, Adorno also gave several examples to prove his point in this regard. Broad attention was given to the field of music, where jazz in particular became the materialised representation of how enlightenment deteriorates. Adorno's essay, 'On popular music' makes three specific claims about popular music. The first is that he claims that it is 'standardised'. Standardisation, as Adorno points out, "extends from the most general features to the most specific ones", the result being that they are basically formulaic and similar. "When jazzing up Mozart he changes him not only when he is too serious or too difficult but when he harmonises the melody in a different way, perhaps more simply than is customary now", (Adorno and Horkeimer, 1979, p.123). ...read more.

It is therefore evident that the natural way to read Adorno in all of these matters is that he was careful to provide a thorough interpretation of modern culture and all of its shortcomings. The next logical step would then be to look for proposals for change, whether it be on the theoretical or the practical level. However, Adorno never reached that step as he was permanently stuck in his pessimistic interpretations, his subjectivist explanations and his anti-revolutionary nihilism. In conclusion, however, I would like to point out that one can hardly fault their pessimistic attitude towards contemporary society and modern cultural industries bearing in mind the argument which I have posed throughout the essay. Fleeing the rationalised mass slaughter and political control of fascism for Taylorist production and mass consumption of modern capitalism, Adorno and Horkeimer despaired at the absence of anything like a global, global revolutionary resistance to what they saw as the 'insomniac rationality of capitalist exploitation'. I do firmly assert that their analysis of the Cultural Industries is still very much applicable today. If anything even more so with the increase of advertising due to the vast technological advancements made alone in the last few decades. In the spectacular stupidity of the latest Star Wars movies or the banality of Celebrity Big Brother, Adorno and Horkeimer might ask us to see the final failure of the Enlightenment project (or, rather, its totalitarian success). The technological management of popular culture centralises power in the hands of those few corporations that control its production and distribution. The culture industry claims to serve the consumers' needs, manipulating them to conform to what it produces - the latest summer blockbuster, the situation comedy, "reality" TV. Variations in consumer income and taste are rationally organised and modifications to the standard form are carefully calculated to ensure that each consumer "choose the category of mass product turned out for his type". Although it provides pleasures for consumers, the culture industry ultimately serves to distract people from the excesses and inequalities of the market. ...read more.