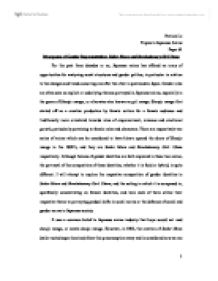 Patricia Lo Topics in Japanese Anime Paper #1 Divergence of Gender Representation: Sailor Moon and Revolutionary Girl Utena For the past three decades or so, Japanese anime has offered an array of opportunities for analyzing social structures and gender politics, in particular in relation to the changes and trends occurring one after the other in postmodern Japan. Gender roles are often seen as explicit or underlying themes portrayed in Japanese anime, especially in the genre of Shoujo manga, or otherwise also known as girl manga. Shoujo manga first started off as a creative production by female writers for a female audience and traditionally more orientated towards roles of empowerment, romance and emotional growth, particularly pertaining to female roles and characters. There are respectively two series of anime which can be considered to have blown opened the doors of Shoujo manga in the 1990's, and they are Sailor Moon and Revolutionary Girl: Utena respectively. Although themes of gender identities are both explored in these two anime, the portrayal of the composition of these identities, whether it is fluid or hybrid, is quite different. I will attempt to explore the respective composition of gender identities in Sailor Moon and Revolutionary Girl: Utena, and the setting in which it is composed in, specifically concentrating on female identities, and how each of them utilize their respective theme to portraying gradual shifts in social norms or the defiance of social and gender norms in Japanese society. ...read more.

(Alison 6). She is an inspiration for girls in modern Japan: to be both comfortable with their traditional female identity, but also to seek out careers and reams unrestricted by their gender. This is exemplified by a particular episode in the Sailor Moon Supers series, where Amy, dons a mechanic outfit to help a friend fix her car. Her new get-up is a puzzle to her fellow friends as Amy is more often seen diligently studying or reading a book. This small part of the episode plays on the stereotype image of females and car mechanics and serves to break down this gender barrier. Also, the relatively different characters in the series encompass a wide variety of different roles so that viewers are better able to identify with a different character. Identify is then not just focused on one narrow character, but viewers are able to choose among the individual traits of each character and identify with them. It is thus the fluidity of female identity portrayed in Sailor Moon that makes it so successful. On the other hand, gender identity in Revolutionary Girl Utena, unlike the fluidity nature of identity portrayed in Sailor Moon, can be analyzed as more of a hybrid, where female characters embody multiple gender traits, especially in the categorization of the main protagonist, Utena. Utena's gender identity is somewhat more ambiguous and more complicated than the characters in Sailor Moon. Although dressed in a boy's uniform and is actively involved in sports and games against boys in her high school, Utena is unmistakingly female. ...read more.

Females are expected to yield to a male for help. In the beginning of the series, the story is illustrated by an unknown prince kissing away the tears of a sad princess. This might mislead the audience to thinking that this stereotypical, fairy-tale like, prince-saving-princess story might lead to a happy ending. However, the prince turns out to be a prince who no longer believes in justice and righteousness and the only road to happiness and freedom relies on the princess's own ability to save herself. This ultimately refutes the societal stereotypical expectation of gender roles and provides a clear yet strong message to the audience that societal barriers can be broken. Though both Sailor Moon and Revolutionary Girl Utena exemplify female empowerment, they have employed different measures to pass this message to the audience. Sailor Moon, through the characters' fluid female identities between a traditional female role and that of a more aggressive and self-aware identity, girls are encouraged to discover new aspects of dimensions, unrestricted by their gender. On the other hand, Utena employs a more subtle method to show its audience the possibility of breaking free from societal norms such as restricted female roles in a patriarchal society. Through the story of Utena's altruistic character and determination to save those around her from suffering, we are able to get a first-hand acknowledgement that defying fixed, stereotypical gender identities is indeed achievable. Reference Alison, Anne. "Sailor Moon: Globalizing Fashion Action". Robertson, Jennifer. " Staging Androgyny". Takarazuka: Sexual Politics and Popular Culture in Modern Japan. University of California Press. 1998. 1 ...read more.