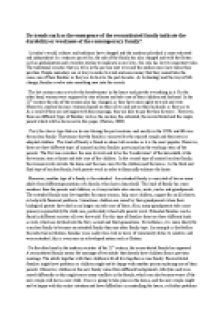 Do trends such as the emergence of the reconstituted family indicate the durability or weakness of the contemporary family?

﻿Do trends such as the emergence of the reconstituted family indicate the durability or weakness of the contemporary family? In today?s world, cultures and traditions have changed and the modern individual is more educated and independent. As centuries passed by, the role of the family has also changed and with the factors such as globalization and everyday routine to implicate in our lives, this role has lost its important value. The traditional societies that use to be in the past are now over and the modern ones have taken their position. People nowadays are so busy in order to work and earn money that they cannot take the same care of their families as they use to do over the past decades. As technology and the way of life change, families evolve into something new into the society. The last century men use to be the breadwinners in the house and provide everything in it. On the other hand, women were supposed to stay at home and take care of their children and husband. In the 21th century the role of the women also has changed, as they have more rights to work and vote. Moreover, modern business women depend on their selves and not on their husbands as they use to. As a result if they are not happy with their marriage, they are able to pay for their divorces. ...read more.

After divorce or death of a parent, a single parent family can be formed. It is going to be very difficult for the single parent, as they have to take care of not only for all their children?s responsibilities but also of the house, as they have to get the money and provide everything. They are going to feel stressed and depressed all of the time because of the loads of work they have as they can?t handle it all. As for the children they are not going to be raised in the same way of a normal family, as it is of course totally different when the children have both their parents in the house. Especially after a divorce many changes are going to take place in the attitudes and the behaviours of children. Children might become aggressive, anti-social, have problems in school and their daily lives, and if the children were really affected they might have personal problems and depression which may need the help of an expert. On the other hand, an important question that must be answered is how the new family trends that have appeared in the society can affect the contemporary family? For example, the gay marriage is a social issue that shown up in the 21st century, as it has several results to the modern societies. ...read more.

The parents both have jobs and tend not to be at home for the children after school most of the time. This creates more freedom especially for the children as they spend a lot of time alone at home. This kind of independence gives the chance to these kids to make mistakes on their own without being warned about them. Also, this occurs when a boss type figure is missing and children cannot lead between right and wrong. A common example of how generations have changed is the family dinner, which uses to be a major tradition. Nowadays this kind of ritual has changed and families don?t eat together as they normally were doing. Examples such as this confirm the weakness in the modern societies, and once again job affects this aspect of the contemporary family. All in all, the importance of the families during the life of an individual is really important since the beginning of modern times. The role of the family in a society is depending also on the different cultures all over the world and their social impact. As Paul Taylor (1974) mentioned, ?all these issues show how family life in the 21st century has radically changed?. After examinations of the sociological histories through the years of areas like Europe, America and Asia, there have been some examples that provide the durability of the term of the family. Families such as the nuclear ones have been vital for societies like Third World where the households are really small and based on strict monogamous marriage. ...read more.