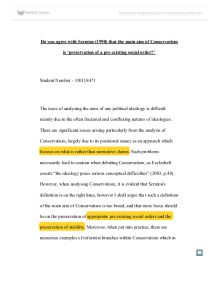 Do you agree with Scruton (1990) that the main aim of Conservatism is preservation of a pre existing social order?

Do you agree with Scruton (1990) that the main aim of Conservatism is 'preservation of a pre existing social order?' Student Number - 110118471 The issue of analysing the aims of any political ideology is difficult mainly due to the often fractured and conflicting natures of ideologies. There are significant issues arising particularly from the analysis of Conservatism, largely due to its positional stance as an approach which focuses on what is rather than normative claims. Such problems necessarily lead to caution when debating Conservatism, as Eccleshall asserts "the ideology poses serious conceptual difficulties" (2003, p.48). However, when analysing Conservatism, it is evident that Scruton's definition is on the right lines, however I shall argue that such a definition of the main aim of Conservatism is too broad, and that more focus should be on the preservation of appropriate pre existing social orders and the preservation of stability. Moreover, when put into practice, there are numerous examples of reformist branches within Conservatism which in fact go beyond Scruton's claim and seek to reinstate social orders of the past. ...read more.

It is not impossible for stability to be achieved through a process of constant and gradual change, so Conservatism should not be tied too closely to the idea that it is bound to upholding a specific social order, as Goldwater (1960, p.12) argues "The true Conservative was sympathetic with the plight of the hapless peasant under the tyranny of the French monarchy". Change is allowed when ordered, as Burke (1790, p.59) argues "a state without the means of some change is without the means of its conservation.". Conservatism should not be seen as opposed to change as Scruton's argument suggests, but rather against the idea that there is a utopia which change can help us move towards. As O'Sullivan (1976 p. 11/12) states, Conservatism is "committed to... the defence of a limited style of politics". As such, according to Conservatism changes should be an good end in themselves, rather than a means or ladder to a greater utopian vision. Although Conservative governments often differ in their practical approaches, by analysing how they act in certain situations gives an indication as to what the essence of Conservatism is. ...read more.

This is for the most part a good, well-argued essay which I would have awarded a 2.1 (which is in line with the submitter's 'upper middle' rating).

The author has a clear introduction followed by thematic, well-argued paragraphs which fit within the overall structure suggested by the introduction. I found a couple of the ideas problematic (particularly concerning liberty) but by and large the nuanced argument is well defined and ambiguities successfully carried through.

The only structural issue is that it doesn't feel as though the essay comes to a conclusion. I suspect the author ran out of words.