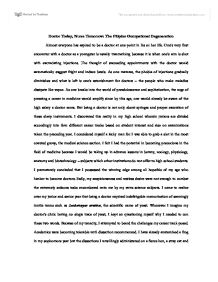 Doctor Today, Nurse Tomorrow: The Filipino Occupational Degeneration. I find it ridiculous and shocking that in the past few years, a significant number of Filipino doctors have willingly chosen to degenerate themselves to nurses. There is absolutely noth

Doctor Today, Nurse Tomorrow: The Filipino Occupational Degeneration Almost everyone has aspired to be a doctor at one point in his or her life. One's very first encounter with a doctor as a youngster is usually traumatizing because it is when one's arm is shot with excruciating injections. The thought of succeeding appointments with the doctor would automatically suggest fright and induce bawls. As one matures, the phobia of injections gradually diminishes and what is left is one's astonishment for doctors - the people who make maladies dissipate like vapor. As one breaks into the world of preadolescence and sophistication, the urge of pursuing a career in medicine would amplify since by this age, one would already be aware of the high salary a doctor earns. But being a doctor is not only about syringes and proper execution of these sharp instruments. I discovered this reality in my high school wherein juniors are divided accordingly into four different career tracks based on student interest and also on examinations taken the preceding year. I considered myself a lucky man for I was able to grab a slot in the most coveted group, the medical science section. I felt I had the potential in becoming precocious in the field of medicine because I would be taking up in advance lessons in botany, zoology, physiology, anatomy and biotechnology - subjects which other institutions do not offer to high school students. ...read more.

In the case of Filipino doctors, they suffer from the racist views of Americans toward Filipinos which takes ground on American views on skin color and on past events that established a derogatory notion of Filipinos in the American mindset. There were different waves of Filipino immigration to the United States and each wave had unfortunately contributed to the aggrandizement of the racism of Americans toward Filipinos. The commencement of the influx of Filipinos to the United States dates back to the 18th century with the settlement of Filipino sailors in the land of present day Louisiana. These so-called "Manilamen" jumped off from the Spanish vessels that they were on to deliver themselves from their excessively rigid captains. A perception of Filipinos being barbaric and uncivilized stemmed because of the manner the Manilamen lived. The Manilamen greatly incorporated hunting into their lifestyle and lived in huts similar to what is seen in rustic areas in the Philippines. They regularly feasted on crocodiles and this habit may have perhaps fueled the disdainful view of Americans toward Filipinos. With the machination of generating adept individuals only to serve under the ideals of the American Government, the second wave of Filipino immigrants step foot on American soil. The passing of the Pensionado Act in 1903 allowed scholars, who were labeled as "Pensionados", to be sponsored and educated by the American government. ...read more.

Potential cardiologists, dermatologists, and surgeons would alternatively become nurses and physical therapists. Thus, a generation of Filipinos who live in contentment with mediocrity would eventually evolve. Optimistically, I confidently assume that not everyone is blinded by cash. I am not completely despondent with the beating of this occupational phenomenon. I am hopeful that not all future Filipino doctors would want to immigrate to another country and degenerate themselves occupationally. I am sanguine that there will be a positively drastic change in current trends of immigration. I am certain that Filipinos would not tire in pursuing their dream, whatever dream it may be, and choose to serve their fellow countrymen more than foreigners. I am wildly rosy that the Philippine economy would surge and be able to accommodate the monetary needs of Filipino doctors. What I hope for the most is the total eradication of racism so that Filipino doctors could remain as doctors and have more opportunities. It is truly a pity that the high human capital attributes of Filipino doctors who become nurses are not further utilized and are prone to be deteriorated over time. The best solution to this occupational crisis is for Filipinos to become more demanding and less piteously resilient. It must not be expected that Americans would be able to erase from their subconsciousness the concept that Filipinos are minor-league. All Filipinos, not only Filipino doctors, must show that they are worthy. Filipinos must prove their caliber and abilities without stripping off their dignity or abdicating their occupational role. ...read more.