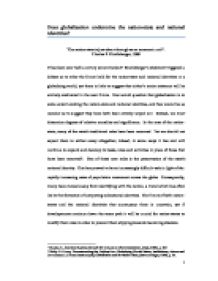 Does globalisation undermine the nation-state and national identities?

Does globalisation undermine the nation-state and national identities? 'The nation-state is just about through as an economic unit'1. Charles P. Kindleberger, 1969 It has been over half a century since Charles P. Kindleberger's statement triggered a debate as to what the future held for the nation-state and national identities in a globalising world, yet there is little to suggest that either's entire existence will be entirely eradicated in the near future. Few would question that globalisation is to some extent eroding the nation-state and national identities, and few would be as cavalier as to suggest they have both been entirely wiped out. Instead, we must determine degrees of relative causality and significance. In the case of the nation-state, many of the state's traditional roles have been removed. Yet we should not expect them to wither away altogether; indeed, in some ways it has and will continue to expand and develop its tasks, roles and activities in place of those that have been removed2. One of these new roles is the preservation of the state's national identity. This has proved to be an increasingly difficult task in light of the rapidly increasing rates of population movement across the globe. Consequently, many have moved away from identifying with the nation, a trend which has often led to the formation of competing subnational identities. The future of both nation-states and the national identities that accompany them is uncertain, yet if developments continue down the same path it will be crucial for nation-states to modify their roles in order to prevent them slipping towards becoming obsolete. ...read more.

The argument that the increased intervention of state authority in the daily lives of citizens has been to hide the state's loss of significance14 is unfounded, as it is exactly this intervention which citizens rely on to be able to compete in the globalising world. In addition, the legal right to cross frontiers is still controlled by states15. This responsibility has always been, and will remain, one of the state's most important functions and decades of globalisation have failed to erode this importance. Increased population movement is one of the driving forces of globalisation, yet as long as its control is still conducted by the nation-state, the role of these states will remain. The significance of the role played by populations and their movements as a result of globalisation should not be underestimated. Nation states are still of central significance with regard to the representation they offer for their populations on the world stage and the legitimacy that they provide to the entire system16. Nation-states are able to do this in a way that no other agency can; they are 'pivots between international agencies and subnational activities because they provide legitimacy as the exclusive voice of a territorially bounded population'17. Although we have seen that through their control of these movements the nation-state has sustained one of its most important functions, there have been some notable developments with regard to national identity. Globalisation has ensured the rapidly increasing mobility of people across national borders. ...read more.

In the case of the nation-state, various traditional roles have moved to international organisations and been replaced by new responsibilities to ensure that the nation is able to operate effectively within the developing global framework. The future of the nation-state is largely dependent on its ability to continue to adapt as the world continues to globalise. As much as this should mean that the nation-state as an entity remains a crucial participant within the globalising world, the fate of national identities is less certain. Increased population flows have led to numerous ethnic minorities and contrasting cultures developing within nations, causing many citizens to identify on a subnational rather than national level. As the world becomes even more globalised this trend is likely to develop further. Although the idea of a global culture is currently misplaced, further improvements to technology and a prolonged period of population movement across borders could well make the concept a reality as the common experience of globalisation bind citizens of different countries together. As Eric Hobsbawm observes, 'our era is still one of nation states - the only aspect of globalisation where globalisation does not work'29. As much as aspects of the nation-state have been undermined by globalisation movements, so long as the state is capable of continuing to adapt to the new challenges it faces and the world lacks an effective global organisation that can achieve requirements on national levels as well as the international stage, the nation-state and the national identity look likely to avoid complete eradication. ...read more.