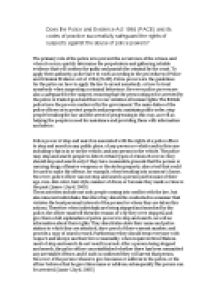 Does the Police and Evidence Act 1984 (PACE) and its codes of practice successfully safeguard the rights of suspects against the abuse of police powers?

﻿Does the Police and Evidence Act 1984 (PACE) and its codes of practice successfully safeguard the rights of suspects against the abuse of police powers? The primary role of the police is to prevent the occurrence of the crimes, and when it occurs, quickly determine the perpetrators and gathering reliable evidence that will confirm the guilty and punish the criminal by the court. To apply their authority, police have to work according to the procedures of Police and Criminal Evidence Act of 1984 (PACE). Police powers are the guidelines for the police on how to apply the law to arrest somebody, or how to treat somebody when suspecting a criminal behaviour. However police powers are also a safeguard for the suspect, ensuring that the person stopped or arrested by the police is treated good and there is no violation of human rights. The British police have the powers conferred by the government. The main duties of the police officers is to protect people and property, maintain public order, stop people breaking the law and the arrest of progressing in this way, as well as helping the people in need for assistance and providing them with information and advice. Police power of stop and search is associated with the rights of a police officer to stop and search in any public place, of any person or vehicle and in this case including what is in or on the vehicle, and any person in the vehicle. ...read more.

(English and Card, 2005) The police have also the power to arrest a person for a breach of peace. The definition of the breach of peace is: B) harm is actually done, or is likely to be done, to a person?s property in his presence; or c) a person is genuinely in fear of harm to himself or to his property in his presence as a result of an assault, affray, riot, or other disturbance.? (English and Card, 2005; 787) In these circumstances the police officer have the right to arrest the person without warrant, if the breach is committed in his presence, or he believes that he will commit breach if he will not be arrested. The police officer has also the power to enter the premises to solve the breaches of the peace. However, it is easy to violate the Human Rights Act 1998, article 8: ?the right to respect for one?s private and family life? (Stelfox, 2009; 65), therefore police officers prior to entering the private premises should ensure that the danger of breach of peace really occur. Another code of practise, called the Code of Practise for the Detention, Treatment and Questioning of Persons by Police Officers. This code is concern with person in custody at police station. There is a 24 hours detention limit, however in more serious crimes additional 12 hours can be requested. ...read more.

Police have a negative image of the ethnic minority, for example young black or Asian males. Despite the fact that discrimination of race is against the law, it doesn?t guarantee that they will be treated equally. Some police officers have racist attitudes. They tend to arrest, as well as stop and search black people more often, because they are more suspicious towards them. This is also associated with the stereotypical thinking that black males are criminals. (Cashmore and McLaughlin, 1991). ?Young blacks over the past twenty- odd years have been accorded a similar distinction: officially defined as a social problem and given special treatment, which has in turn emphasized their problematic status? (Cashmore and McLaughlin, 1991; 10). The police is still one of the most important institution and have a particular role in the country. The police have many rules and procedures in applying their power; also police powers are affecting the sphere of rights and freedoms of man and citizen. Most of the regulations are a safeguard for the rights of suspect. However, in some cases, like the racist behaviour of police officers these rules may be breached. However, despite the fact that after analyzing the functioning of the Police and noticing some inadequacy or doubts, it seems that it accomplish its responsibility appropriately. This is accomplished through cooperation with other authorities, as well as fulfilling their own laws, in the matter of protection of public safety and to maintain security and public order. ...read more.