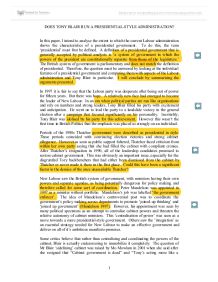 DOES TONY BLAIR RUN A PRESIDENTIAL-STYLE ADMINISTRATION? In this paper, I intend to analyse the extent to which the current Labour administration shows the characteristics of a presidential government. To do this, the term 'presidential' must first be defined. A definition of a presidential government that is generally accepted by political analysts is 'a system of government in which the powers of the president are constitutionally separate from those of the legislature.' The British system of government is parliamentary and does not match the definition of presidential. Therefore, the question must be answered by looking at the individual features of a presidential government and comparing them with aspects of the Labour administration and Tony Blair in particular. I will conclude by summarising the arguments presented. In 1997 it is fair to say that the Labour party was desperate after being out of power for fifteen years. But there was hope. A relatively new face had emerged to become the leader of New Labour. In an era when political parties are run like organisations and rely on numbers and strong leaders, Tony Blair filled his party with excitement and anticipation. ...read more.

Robin Cook also resigned over Blair's conduct regarding the Iraq war. However, not all cabinet ministers are that willing to give up their positions. In recent years, parliament has witnessed the rise of 'career politicians'. People that have aligned their education and career purely in the pursuit of becoming a member of parliament and eventually a cabinet minister. After a lifetime of working towards the positions in which they now find themselves, they would probably think twice before challenging party policy and jeopardising their career. There is certainly a strong incentive for cabinet ministers to conform to policies recommended by the Prime Minister. The benefits to the Prime Minister of having a supportive cabinet have already been highlighted. A 14.4% rise in people studying politics at university this year is an indication that the occurrence of 'career politicians' is set to become more common in the future. The British Prime Minister has always had many powers which some would deem to be excessive. These include the power to: choose their election date; appoint members of the judiciary; appoint the archbishop of Canterbury; dismiss members of the cabinet and arrange committees and agendas. ...read more.

Perhaps the distinguishing factor for Mr Blair is his massive parliamentary majority and support, and ability to push through new legislation. However, the government of Mrs Thatcher again proves to be a useful counterexample with her industrial reforms being as prominent as any of Mr Blair's legislation. Factors such as the extent of Mr Blair's manipulation of the media are unique to his style of government. In my opinion, the combination of evidence presented in this paper does indicate the Tony Blair runs a government that is more presidential in style than previously seen in Britain. So what are the implications of this apparent change in style? Many political commentators believe that the British government just isn't set up to provide the necessary checks and balances for a presidential style of government and that Labour is undermining the pluralism of cabinet government. However, the fact remains that society is changing and the celebrity culture, as previously mentioned, is prevailing. A powerful and charismatic figurehead for Britain on the world stage could prove to be a useful asset in the future. Is a presidential style of government much worse than any other? It worked for the US. ...read more.

This is a very weak essay. Were it being marked for my first year British Politics module, it would be in line with my department's marking criteria for the 3rd category. This is for the following reasons: 1) Referencing! There are no academic references here at all. Not one. For a first year essay I would expect to see between 6-10 sources as a minimum, and to see them actually used. The sources in the bibliography (textbooks) do not appear in the essay, and the (newspaper) sources which do are not in the bibliography. This is such bad practice and leaves the student open to allegations of plagiarism, which would ensure far bigger problems than a poor essay mark. 2) No critical engagement. As aforementioned, the lack of academic sources entails there is virtually no engagement with theories or concepts, the independent understanding of which should form the backbone of university level politics work. 3) Little evidencing. There is so much assertion here it's shocking. ANY time you make a point such as 'some people believe', you need to specify which people these are, and preferably reference it. 4) Weak structure. This is a bit of a magical mystery tour, with no explanation in the introduction as to what points will be made and in what order. Paragraphs lead nowhere. 5) Poor definition. There is no attempt to outline distinctive features of presidentialism or parliamentary government, and to consider how these have changed over time. Equally, there is little notion of where power lies in each and what the effects might be of increasing presidentialism within a parliamentary system.