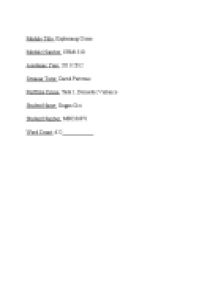 ﻿Module Title: Explaining Crime Module Number: CRM1310 Academic Year: 2011/2012 Seminar Tutor: David Porteous Portfolio Crime: Task 1, Domestic Violence Student Name: Ongan Cici Student Number: M00336971 Word Count: 622 DOMESTIC VIOLENCE There are many people facing with domestic violence in daily life. The reason that I thought this is a very interesting form of crime and decided to write about it, is that, it is not towards people that they do not know each other, this is a crime in between people that has close relationships with each other. This essay will show my opinion of why people engage domestic violence, the reasons of my opinion, as well as, the definition of this crime. ...read more.

The other reason is the choices and decisions that individuals make to commit domestic violence with their free will, even though, they know it is an illegal behaviour and they are aware of the consequences. For example, some people can abuse someone that has close relationship with just to get pleasure, or under the influence of illegal drugs, some individuals can be abusive towards to their partners, friends or relatives. However, in both ways, no matter what the excuse is, the abuser should be punished. Domestic Violence can be defined as abusive behaviours towards to someone that has close relationship to the abuser. ...read more.

Furthermore, according to Richards, Letchford and Stratton (2008), in most of the forced marriage cases, generally woman, tend to be a victim of domestic violence and still in some countries individuals do not have permission to make their free choice for marriage and they need to get married with a person chosen for them. In conclusion, this essay has showed, my opinion of two reasons of why people commit domestic violence with some examples, and the definition of this crime. Finally, the definition of domestic violence was the same definition that I was thinking before I start this essay. However, I did not have any idea that there are so many different ways to commit this crime. In my opinion, there is no excuse to commit any crime and whoever breaks this rule should be punished in any circumstances. ...read more.