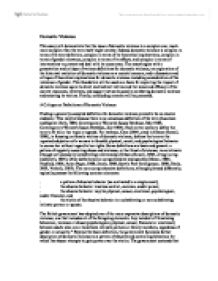 Effects are not restricted to those that are physical and psychological in nature, however. Women can be financially impacted as well. Brown and Kenneym (1996) contend that women, in an effort to flee their attackers, may give up financial security and their homes in favor of safety. Mothers may experience additional negative effects from domestic violence. Starr (2001) contends that domestic violence against mothers is associated with harmful implications for mental health and parenting, as well as for the offspring. According to Starr, mothers who are in an environment of domestic violence suffer worse outcomes for themselves and for their children. Isaac (1997) suggests that abuse of mothers and children are linked, stating that from thirty to almost sixty percent of mothers reported for child abuse were themselves abused. Hewitt (2002) claims that ninety percent of occurrences of domestic violence are witnessed either directly or indirectly by children. Children can be affected in at least two ways by domestic violence. According to the British government, they can be traumatized by violence they witness against others in the relationship even when they are not the specific targets of the violence (CrimeReduction.gov.uk, Domestic violence mini-site, 2005). According to Hewitt (2002), children suffer low self-esteem, isolation, trauma, and homelessness that they may not manifest until later in life. They may also suffer from maladies such as worry, sadness, focus and concentration difficulties, forgetfulness, headaches and stomachaches, lying, and poor impulse control, according to Salisbury and Wichmann (2004). Importantly, there is also a strong correlation between domestic violence and child abuse, a point which reinforces Isaac's position mentioned earlier (CrimeReduction.gov.uk, Domestic violence mini-site, 2005). Edleson (1999, cited in Spath, 2003) takes the same position in stating that numerous research studies over the last several decades have reported a connection between domestic violence and child maltreatment within families. And, finally, as mentioned earlier, the social learning theory would suggest that children who witness violence learn that violence is an acceptable way to settle disputes. ...read more.