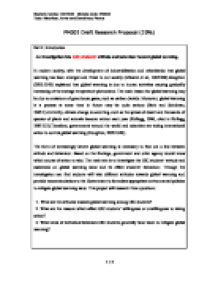 PM002 Draft Research Proposal (20%) Part 1: Introduction An investigation into GIC students' attitude and behaviour toward global warming. In modern society, with the development of industrialization and urbanization that global warming has been emerged and threat to our society (Mikami et al., 1995:209).Houghton (2005:1343) explained that global warming is due to human activities causing gradually increasing of the average temperature phenomena. The main reason for global warming may be due to emissions of greenhouse gases, such as carbon dioxide. Moreover, global warming is a process at some time in future may be quite serious (Berk and Schulman, 1995:1).Currently, climate change is occurring, such as the spread of desert and thousands of species of plants and animals become extinct each year (Kellogg, 1986, cited in Kellogg, 1987:131).Therefore, governments around the world and scientists are taking international action to control global warming (Houghton, 2005:1343). The form of increasingly severe global warming is necessary to find out a link between attitude and behaviour. Based on the findings, government and other agency would know which course of action to take. The main aim is to investigate the GIC students' attitude and awareness on global warming issue and its effect students' behaviour. ...read more.

Furthermore, they believe that increased carbon dioxide and other gases released into the atmosphere if unchecked which lead to global warming and the average temperature are increased (Leiserowitz, 2003:10). Lorenzoni et al (2007:449) discovered that some people are unwilling to take action even though they realize the importance of global warming. The reason why people do not take action on the grounds is they think global warming issues are the responsibility of society and government rather than individual responsibility. Secondly, many people are reluctant to change their schedules and living habits. For example, driving to work has become unconscious habitual behaviour (Lorenzoni et al., 2007:454).In addition, some people lack of scientific knowledge that they did not believe the existence of global warming or believe global warming is a natural imagination and people cannot control it (Leiserowitz, 2003:58). Currently, recycling and saving energy are the majority of common people's actions (Whitmarsh, cited in Lorenzoni et al., 2007:447). Alleviating global warming requires that the government's plan and international treaties restrictions. About the policy of the government, incentives and technological solution for getting people's support higher than the policy of raise tax (Shackley et al., 2004; Kasemir et al., 2003; O'Connor et al., 1999, cited in Lorenzoni et al., 2007:447). ...read more.