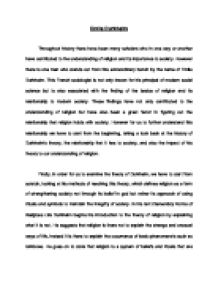 Durkheim on religion. In his text Elementary Forms of Religious Life Durkheim begins his introduction to the theory of religion by explaining what it is no

Emile Durkheim Throughout history there have been many scholars who in one way or another have contributed to the understanding of religion and its importance to society. [DP1]However there is one man who stands out from this extraordinary bunch [DP2]by the name of Emile Durkheim. This French sociologist is not only known for his principal of modern social science but is also associated with the finding of the basics of religion [DP3]and its relationship to modern society. These findings have not only contributed to the understanding of religion but have also been a great factor in figuring out the relationship that religion holds with society[DP4]. However for us to further understand this relationship we have to start from the beginning, taking a look back at the history of Durkheim's theory, the relationship that it has to society[DP5], and also the impact of his theory to [DP6]our understanding of religion. [DP7] Firstly, in order for us to examine the theory of Durkheim, we have to start from scratch, looking at his methods of reaching this theory, which defines religion as a form of strengthening society not through its belief in god but rather its approach of using rituals and symbols to maintain the integrity of society[DP8]. In his text Elementary Forms of Religious Life Durkheim begins his introduction to the theory of religion by explaining what it is not. ...read more.

Despite the allegations against Durkheim, he nevertheless brought forward to us a theory that challenges the many aspects of being involved with a religious group. Durkheim's theory of totemism is no more different that what religion is defined by many modern scholars today[DP32], as it involves the same aspects of rituals which gives the individual a sense of belonging. But the main concern for Durkheim was looking at religion as a source that not only emphasized on the individual but also on the group. This emphasis on group provided Durkheim with the theory that religion does not need any sort of spiritual deity to exist, as religious groups form a bond not through the belief in god but rather through their members. In conclusion, Durkheim's theory on religion is a concept that is very difficult to grasp[DP33], as people who follow a certain religious path find the theory going against their customs and beliefs. The reason for this is that Durkheim looks to religion not as a way to gain spiritual healing but rather a way to attain yourself with the belief that you as an individual belong to a certain group, which not only gives you the strength to face society but also the strength to face your own self in times of crisis.[DP34] Finally, the theory by Durkheim not only questions the natural phenomena's of religion but also brings forward the concept that religion does not need the existence of god to be symbolized as a true form of religion. ...read more.

Durkheim is very clear that his explanations are not reliant on religious beliefs in God - he seeks his own explanations that might not at all be part of the religious person's framework of interpretation. [DP25]Not clear - simplify and edit [DP26]Again, why is finding the most basic example of something of such importance to Durkheim? This is at the heart of his approach. [DP27]It is problematic that you can write this paragraph without any concern for demonstrating a use of sources. [DP28]This is redundant - Durkheim's theories include an understanding of religion - it provides a model for understanding religion - so what is the model - go beyond general references to totemism and discuss the mechanics of these social experiences. [DP29]According to who? You have to provide evidence (refernces) to back up statements like this. [DP30]This is all descriptive with little to no analysis. The first idea that should concern you after making a claim that some scholars see hi theory as irrelevant is to show an example - a statement from a scholar that actually says what you say. You don't cite anyone, so I am not sure where you got this idea. It is also a pure description - it is far more important to know why someone considers his theory irrelevant than to simply say that someone thinks it is irrelevant. [DP31]This is so preliminary and requires far more articulation. ...read more.