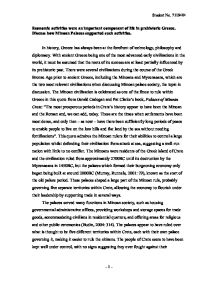 Economic activities were an important component of life in prehistoric Greece. Discuss how Minoan Palaces supported such activities.

Economic activities were an important component of life in prehistoric Greece. Discuss how Minoan Palaces supported such activities. In history, Greece has always been at the forefront of technology, philosophy and diplomacy. With ancient Greece being one of the most advanced early civilizations in the world, it must be assumed that the roots of its success are at least partially influenced by its prehistoric past. There were several civilizations during the course of the Greek Bronze Age prior to ancient Greece, including the Minoans and Mycenaeans, which are the two most relevant civilizations when discussing Minoan palace society, the topic in discussion. The Minoan civilization is celebrated as one of the finest to rule within Greece in this quote from Gerald Cadogan and Pat Clarke's book, Palaces of Minoan Crete: "The most prosperous periods in Crete's history appear to have been the Minoan and the Roman and, we can add, today. These are the times when settlements have been most dense, and only then - as now - have there been sufficiently long periods of peace to enable people to live on the low hills and flat land by the sea without needing fortifications". This quote admires the Minoan rulers for their abilities to control a large population whilst defending their civilization from attack at sea, suggesting a well-run nation with little to no conflict. ...read more.

During the new palace period, many of the old palace period architectural features remained unchanged, though a slight change can be seen in the burial customs, with chamber tombs becoming popular (Cadogan, Clarke, 1991: 55). Despite this, larnax, pithos and tholos burial sites continued to be used alongside this new type. Paved roads also began to appear at many palatial sites, including the 'royal road' at Knossos, added in the new palace period. These roads show the palaces were well linked with one another, and possibly that the leaders of each palace would visit one another, potentially staying in the residential quarters of each other's palaces, keeping relations happy between the individual territories and ensuring the smooth running of the civilization. The Minoan palaces also contained residential quarters, though it is not known exactly who stayed there, but it is certainly possible that the ruling elite lived in them, or that they were guest suites for important visitors (Haughton, 2007: 51). The residential quarters at Knossos were once very elaborately decorated, and enjoyed a view of the beautiful central court, appearing to be a very desirable place to stay (Murray, Runnels, 2001: 79). If these 'residential quarters' were for other leaders to visit, the elaborate finish would have impressed them, and thus aiding relations between the different territories of Crete. ...read more.

Though the script has not been deciphered as of yet, it is apparent that the script used by the later Mycenaean civilization in Greece, named 'Linear B' was influenced a great deal by the Minoan 'Linear A', one of several Minoan cultural aspects the Mycenaeans appear to have recycled after their destructive takeover (Budin, 2004: 227). The palaces were eventually destroyed, along with the Minoan civilization, by the Mycenaeans, the Greek civilization who followed (Murray, Runnels, 2001: 79). The Mycenaeans used many of the Minoan ideas themselves, including a very similar writing method and many art and architectural styles distinct to the Minoans, showing they at least respected the quality of the Minoan style. In conclusion, the Minoan palaces of prehistoric Greece heavily supported the economic activities of the civilization, allowing for the creation and storage of trade goods, with trade probably being the main source of economy at the time along with agriculture, which they supported via trade. As mentioned, it is probable that whoever was leading within the Minoan palace society was using religion to heavily influence their people, making it a large part of their everyday lives and, it seems, impossible to avoid. However it appears this was, despite being fairly immoral, beneficial to the continuation of the society, as it seems the Minoan people were happy with their leadership enough to remain under control, and the society prospered for many years as one of the longest surviving Cretan civilizations. ...read more.