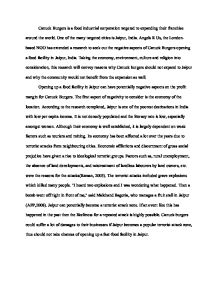 Effects on economy due to a food outlet

Canuck Burgers is a food industrial corporation targeted to expanding their franchise around the world. One of the many targeted cities is Jaipur, India. Angels R Us, the London-based NGO has extended a research to seek out the negative aspects of Canuck Burgers opening a food facility in Jaipur, India. Taking the economy, environment, culture and religion into consideration, this research will convey reasons why Canuck burgers should not expand to Jaipur and why the community would not benefit from the expansion as well. Opening up a food facility in Jaipur can have potentially negative aspects on the profit margin for Canuck Burgers. The first aspect of negativity to consider is the economy of the location. According to the research completed, Jaipur is one of the poorest destinations in India with low per capita income. It is not densely populated and the literacy rate is low, especially amongst women. Although their economy is well established, it is largely dependent on weak factors such as tourism and mining. Its economy has been affected a lot over the years due to terrorist attacks from neighbouring cities. Economic afflictions and discernment of gross social prejudice have given a rise to ideological terrorist groups. ...read more.

The state of affairs is even worse during the summer when water may be accessible for only a few minutes, or every second or third day. In those time periods, water would have to be imported in or kept in large bulks for emergencies in order to serve the consumers water and properly clean materials in the restaurant. In addition, since it is not a well developed country, there are a lot of power outages which could be a problem for food storage. Meat used to make the burgers are stored in fridges, and during the power outages the meat will spoil which will result in loss of inventory and as well as money. If power generators come to mind to power the stores then that would just add to the extra expenses that need to be made if Canuck Burgers were to expand there. The economy is not as stable as other countries and the chances for success are lenient towards a negative outcome. Furthermore, entering into this economy and market can cause for a lot of "copy-cats." The competition in the market could be another factor influencing the success of this new corporation aimed at opening in Jaipur. ...read more.

Halal food refers to meat that is cut in the name of God. If Canuck Burgers wanted to succeed in Jaipur they would have to sell all Halal food and modify their menu if it includes any bacon or ham because Muslims do not consume pork as well (Huda, 1998). There are many religious restrictions with opening up a food facility in a city like Jaipur. One must serve food with respect to the other religions present and base their materials to what the consumers prefer to eat, and not what they have to sell because after all, it is the consumers that have to be pleased enough to purchase the item in order to gain profit. Overall, the research of Jaipur's economy, religion, and environment shows that Jaipur is not the strongest location to expand Canuck Burgers in. It has an established economy but is still not the strongest in order for Canuck Burgers to survive. The existing businesses could also get negatively affected in Canuck burgers were to open in Jaipur; businesses would be lost. Furthermore, The ingredients used in the food may bring the downfall of the company since the majority of the population cannot consume what it is made of and will not result in a handsome profit. Therefore, Canuck Burgers Corporation and the community would both benefit if Canuck Burgers Corporation did not open a fast-food facility in Jaipur, India. ...read more.