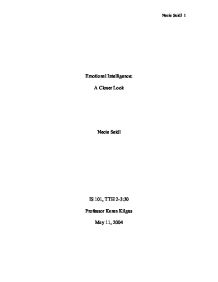 Emotional Intelligence: A Closer Look Necie Seidl IS 101, TTH 2-3:30 Professor Karen Kilgus May 11, 2004 Emotional Intelligence is a concept commonly underestimated. Taking the proper amount of time out to get to know oneself is a valuable skill not too many are aware exist. I intend to put the concept of emotional intelligence under the microscope. What IS emotional intelligence (EIQ)? Does it have a place in psychological and/or scientific history? To what extent are the components of emotional IQ rooted in our ontogeny, and which structures in the brain contribute to emotional awareness? How can the utilization of EIQ help to raise a more emotionally aware generation? In what ways can a working knowledge of body language, as it functions within each culture, enrich ones EIQ? Emotional Intelligence has been defined in many different ways, though that is to be expected considering the fact that EIQ has yet to be universally recognized by science and psychology as a pure form of intelligence. Dr. Daniel Goleman, psychologist and author of various self-help books, defined EIQ as: Knowing ones emotions, Managing Emotions, Motivating Oneself, Recognizing Emotions in Others, and Handling Relationships. This is vastly different from the typical Intelligence Quotient which is defined as: "The ratio of tested mental age to chronological age, usually expressed as a quotient multiplied by 100."1 Unfortunately, it isn't clear whether or not the "tested mental age to chronological age" has changed from that of its inception, or if these concepts even apply to today's expectations. ...read more.

This idea was put to rest by studies showing that emotional reactions, but not sensory and motor processes per se, require the input of the hypothalamus. In 1934, on the basis of such observations, anatomist James W. Papez proposed a circuit theory of emotion that eventually evolved into the limbic system. From what I've gathered from the lectures given by Fresno City College's Professor Allen Beck, many of the structures responsible for the homeostasis and rhythms of the body also produce emotion, which is not too surprising. The most important of the brain structures that produce emotion are called, collectively, the limbic system (the term limbic merely refers to its position at the inner edge of the brain). This system sits above the brainstem and under the cortex. A number of structures in the brainstem and parts of the cortex also participate in producing emotion. All these limbic, cortical, and brainstem structures are connected by neural pathways. Of the three core structures that contribute most heavily to the functioning of the Limbic System (the hypothalamus, the hippocampus and the amygdala), the amygdala is most important in regards to emotional intelligence. Deep in the lateral forebrain lies the amygdala, an almond shaped mass of gray cells. It appears to play a key role in the ability to recognize facial emotion, particularly negative emotion such as fear, and to play a role in emotional memory. ...read more.

is of greater significance. Between 60-80% of our message is communicated through our Body Language, only 7-10% is attributable to the actual words of a conversation. Some psychologists claim that the impact you make on others depends on what you say (7%), how you say it (38%), and by your body language (55%). Since how you sound also conveys a message, 93% of emotion is communicated without actual words. It's often not what you say that influences others; it's what you don't say.3 It's a given that, although there are some similarities, for the most part body language is culture specific. Fuad I. Khuri, a leading Middle East anthropologist, has observed that: Body language is culture-bound, and therefore, the same gesture may convey different meanings in different cultures. Whereas kissing men signifies amity and friendship ties in Arab culture, in many western societies outside the Mediterranean it often indicates a homosexual commitment. The same goes for facial expressions. Psychologist Paul Eckman coined the term Display Rules ("norms regarding the expected management of facial appearances"), the expected facial expression varies culture to culture. "Anyone can become angry-that is easy. But to be angry with the right person, to the right degree, at the right time, for the right purpose, and in the right way-this is not easy." Philosopher Aristotle sums up the concept of emotional intelligence perfectly. By blending the sociohistorical, the physiological, the educational, and the kinesthetic, you have all the components needed for attaining a high Emotional Intelligence Quotient that will benefit anyone in most any situation. ...read more.