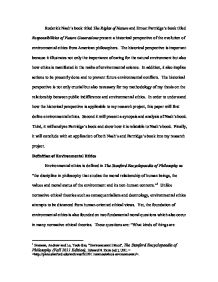 However, both have a difference of views. Jonas' paper argues that "the source of this new responsibility of this generation to the future is unprecedented. The source of this new responsibility is the foresight and the power that have come with our scientific knowledge and with our technology. Therefore, a reconstruction of moral philosophy is needed."15 On the other hand, Thomas Derr's paper argues that "the case for such a duty may be significantly enhanced by viewing the human condition from the transcendent perspective which the religious imagination affords."16 The second section contains papers whose purpose was to pose moral questions concerning the duty to the future generation. The fundamental moral questions regarding the duty to the future generation are the following: who is the future generation and what is the current moral reasoning? The future generation refers to a population of human beings whose existence depends on current reproductive decisions. When it comes to deciding whether or not they should be included in moral decision-making, there are implications that need to be considered. These implications are that "persons who will never come into being cannot conceivably occasion social conflict, so merely possible persons need not enter into our moral thinking at all."17 Furthermore, this means that "there is no such thing as a right to come into being or a right to be born."18 The third and fourth section consists of five papers that discuss the disputed topic of whether or not future generations can be said to have rights. A right means to have "a claim to something and against someone, the recognition of which is called for by legal rules or, in the case of moral rights, by principles of an enlightened conscience."19 The three authors who argue that future generations do have rights are Joel Feinberg, Galen Pletcher and Annette Baier. The two authors with the opposing views are Richard T. ...read more.