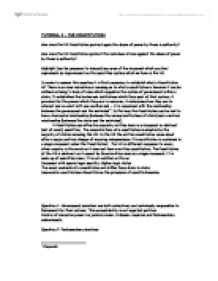 Essay plan. How does the US Constitution protect the individual citizen against the abuse of power by those in authority? Is this an improvement on the UK system?

TUTORIAL 2 - THE CONSTITUTION How does the US Constitution protect again the abuse of power by those in authority? How does the US Constitution protect the individual citizen against the abuse of power by those in authority? Highlight (and be prepared to discuss) any area of the document which you feel represents an improvement on the unwritten system which we have in the UK. In order to answer this question it is first necessary to establish what a Constitution is? There is no clear indication or meaning as to what a constitution is however it can be defined as being "a body of rules which regulates the system of government within a state. It establishes the bodies and institutions which form part of that system, it provides for the powers which they are to exercise, it determines how they are to interact and co-exist with one another and ... it is concerned with the relationship between the government and the individual'1. In this way the Constitution can be said to have a horizontal relationship (between the various institutions of state) and a vertical relationship (between the state and the individual). A Constitution can either be concrete, written down in a document or abstract (set of rules), unwritten. The concrete form of a constitution is adopted by the majority of states including the US. ...read more.

but if it is to strong then it cannot be amended to reflect changes in society. Eg. Us const included the right to own slaves which was later removed wen the maj recognised this as unacceptable. Maj of written const are produced after a revolution written after war of indipendance from Britain. Although maj countries hav a written const new Zealand and iseaiel don't have one. UNWRITTEN CONSTITUTION By contrast, the uk with an unwritten const has no single document which sets out power relationships between the state. Instead we have many sources both written and unwritten which combne to provide the rules regulating the state. (one of the most significant aspects of the unwritten const of the uk is that there is no clear statement of where power lies within the state. Much power is apportion the uk by means of historical and often informal arrangements, customs and traditions. These can be said to have worked for centuries in the uk but it is difficult to ensure accountability when there is uncertainty over precisely where power lies. RIGHTS ANDTHE CONSTITUTION One of the most important aspects of the written constitution is that it provides protection for individual rights. Eg us specifically lists a number of rights as amendments tothe constitution first amendment right to reedom of speech. Such rights cannot be taken away by the state. ...read more.

Central Government ( also known as the 'federal' government) retains the most important powers relating to matters such as defence, wheras the individual 'states' have power on a local level and have their own constitutional status. By contrast, the UK has a 'Unitary' constitution where all power resides in the centeral state institutions. We do have local Governmnet, in the form of local councils but these can be altered (or even abolished) by the centeral government at any time. A Constitution with power concentrated in centeral government. Local governments may exist but not with the same constitutional status of the states under a federal constitution. Example of the abolition of the Greater London Council in 1985 as an example of power remaining with centeral government under a unitary constitution. ( the federal government of the us could not abolish one of the states in this way under the federal system). (cud discuss if preferable 2 av aelected president under a republican const or an unelected monarch as in uk.). Our constitution appears to work reasonably well because we are a prosperous society with relative freedom. The negligible protection for individual rights provided by the uk const. Because the state is not constrained by a written const it can change the a wand remove oour rights. The uk const has worked well but if anything was to go wrong there is little protection for the individual to be found in the const. 1 Parpworth ?? ?? ?? ?? ...read more.