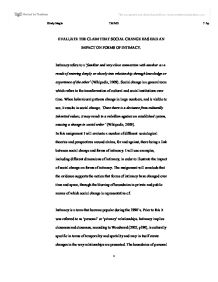 Intimacy refers to a ‘familiar and very close connection with another as a result of entering deeplyor closely into relationship through knowledge or experience of the other’ (Wikipedia, 2009).  Social change is a general term which refers to the transformation of cultural and social institutions over time. When behavioural patterns change in large numbers, and is visible to see, it results in social change. ‘Once there is a deviance from culturally inherited values, it may result in a rebellion against an established system, causing a change in social order’ (Wikipedia, 2009).

Intimacy is a term that became popular during the 1990’s. Prior to this it was referred to as ‘personal’ or ‘primary’ relationships. Intimacy implies closeness and closeness, according to Woodward (2002, p190), is culturally specific in terms of temporality and spatiality and may in itself create changes in the way relationships are presented. The boundaries of personal or intimate relationships are not fixed in time and space, they are subject to change. Social change is representative of the blurring of these boundaries and forms new types of intimate space, personal expression and also public disclosure. Jamieson (1998) describes this new form of relationship as ‘disclosing intimacy’, meaning to constantly reveal inner thoughts and feelings to each other, speaking from a position of increased equality and equal gender relations. ‘Mutually shared intimacy of this type typically requires a relationship in which people participate as equals….across genders, generations, classes and races’ (Jamieson, 1998, p.1).  So, disclosing intimacy involves reflexivity, meaning to think and talk/communicate about relationships and emotions in a democratic way in which all parties are equal. Equality in itself suggests significant changes in social divisions and inequalities between men and women and also implies reductions in differences of social class, race and age.

According to Woodward (2002), as people change the way that they express their feelings and thoughts, i.e.; through talk shows and internet, the boundaries between private and public are becoming blurred and that this social change is the reason that intimacy may be being transformed. There are so many different sources where one can go to seek advice on conducting personal relationships, i.e.; magazines and newspapers, one begins to wonder if personal relationships are in fact personal at all or are they socially constructed relationships, socially constructed forms of intimacy?  ‘It is apparent that such manuals are themselves part of the discourse which creates the goals which the reader is encouraged to achieve’ (Woodward, 2002, p.202).

Foucault (1981, In Jordan 2002, p195) argues that expression or disclosure of intimate feelings hasn’t changed but it is instead the new discursive sites such as chat shows that are putting intimacy into discourse. He relates disclosure in public to that of confessions in a church or to an authoritative body who can judge, punish, forgive and so doesn’t see any major change in this sense. He sees the change occurring due to the communication techniques now used to present discourse in public time and space. He also recognises a change in that in modern times it is now the psychoanalyst or counselling sessions or magazines that people seek to off-load confessions instead of the priest. Changes in relation to intimacy mainly focus on how and where personal expressions of intimacy take place, emphasizing the change from the private (confessional) to public (disclosure) arenas.

New communications then provide a platform for new forms of disclosure. Global scale communications can be seen as reconstructing both time and spaces in which this type of intimate communication takes place. It could be said that transformations in communications contribute to the changing dimensions of disclosing intimacy and expressions of intimacy, for example; disclosing in public. The internet and cyberspace make it possible to have a relationship at a distance whereas before it had to happen within close proximity. In this case it would appear that sexual contact is no longer required to form intimate relationships. It also discounts any constraints around race, gender and age. In terms of virtual reality, new identities can be created leaving social role performance such as race, within written text. So these communications involve disclosures about the individual that are unmediated by any sense of physical or visual clues.  However, although cyber space can allow freedom from some of the social constraints involved in other forms of communication, virtual reality still assumes the cultural expectations of the everyday reality. For example, if you thought you were communicating with a woman you would still converse in a way that would culturally relate to a woman.

Consequently, social changes in relation to intimacy are diverse and have various differing social outcomes.  Over the last Fifty years social trends in patterns of domestic living and relationships have changed in many different ways such as divorce rates, people cohabiting instead of marrying, single parent families and recognition of same sex relationships.  According to the Office of National Statistics (2000, p.39) demographic changes in society such as the divorce reform act of 1969 showed a dramatic increase in UK divorce rates in the 1970’s compared to previous years. This suggests changes in relationships such as freedom to leave unhappy relationships and perhaps greater control over expectations of what a relationship should consist of.

In relation to this Anthony Giddens argues that disclosing intimacy features what he calls ‘high moderninity’ associated with a rejection of tradition and necessitates an inner need which is satisfied by pure/intimate relationships (Giddens, 2001. Found in Jordan, 2002, p.201). He argues that relationships are no longer directed by tradition, gay relationships, for example are accepted as high moderninity allows greater equality and freedom. Giddens believes that these ‘transformations of intimacy’ occur in moderninity through a process of self-reflexivity and because partners are no longer chosen via economic factors and marriage is no longer a contractual obligation. He refers to marriages in high moderninity as ‘pure relationships’ involving commitment but only lasting for as long as the emotional satisfaction is being delivered to and by those involved. So the relationship is equal as both parties are concerned with the emotional qualities of the relationship. ‘One normally stays a friend of another only insofar as sentiments of closeness are reciprocated for their own sake’ (Giddens, 1991, p.90). Giddens also acknowledged other forms of relationships such as what he refers to as ‘Plastic Sexuality’ whereby such relationships as prostitution would fall into this category. There is no emotional connection and no reproductive intent.

In contrast to Giddens’ theory, Jamieson argues that inequalities of society prior to and in Giddens’ high moderninity are still present, and that there is no transformation of intimacy occurring. She interprets the divorce figures by ONS differently to Giddens and believes that women instigate divorce due to financial and practical reasons after their partner has initiated the marriage breakdown. She argues that the marriage arrangement is not just an equalization of emotional feelings but constitutes a ‘key node in a web of financial and domestic arrangements’ (Jamieson, 1998. Found in Jordan, 2002, p.214 Reading 5.1). They seek divorce as legal recognition to secure financial and social welfare. Jamieson questions if there is greater inequality in gender couple relationships and looks at things such as domestic violence within relationships still occurring in over a quarter of US marriages as showing inequalities still exist (28 per cent; Straus, Gelles and Steinmetz, 1980). She refers to the persistence of men still unwilling to participate equally in domestic chores, still living in the past psych of the male breadwinner, woman home worker. So in Jamieson’s theory intimacy constitutes the contribution of labour within relationships as a pose to how feelings are expressed to each other through disclosure, thus pointing to no single form of transformation of intimacy, material factors still count.

On the other hand, Jennifer Harding (1998, fond in Jordan, 2002, p.207) suggests that instead of understanding relationships in relation to separate private and public spheres, the two are interlinked, as public experiences also have an impact on private experience and visa versa. She argues that the interrelationship between the two arenas has changed over time in relation to visibility and which intimate acts, such as breastfeeding, should be seen in public. ‘Breastfeeding may represent a moment of shared pleasure and intimacy enjoyed by babies and mothers. Doing it in public for the first time, a woman may sense the discomfort o others and feel uncomfortable herself’ (Harding, 1998. Found in Jordan, 2002, reading 5.3).  So although social change has occurred through expression of intimate feelings or the way they are displayed, it does not necessarily mean that people involved are in control or do not suffer inequality/oppression because of this disclosure.

In conclusion, it could be said that intimacy has been transformed through generational changes that are reconstructed through time, or it could be argued that intimacy has changed by its association with the public space or indeed that changes of intimacy have taken place due to economic factors. All these dimensions of intimacy must be taken into account, each is of equal significance when discussing the impact of social change on forms of intimacy. What is apparent to see is that personal relationships have changed over time and also through space and is most prevalent between the shifting boundaries between the public and private spheres.

Giddens, A. (1991) Modernity and Self-Identity: Self and Society in the Late Modern Age, Cambridge, Polity Press.