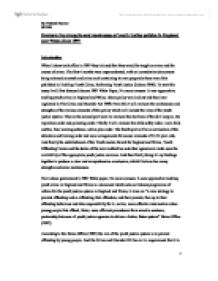 Evaluate the strengths and weaknesses of youth justice policies in England and Wales since 1997 Introduction When Labour took office in 1997 they claimed that they would be tough on crime and the causes of crime. The first 6 months were unprecedented, with six consultation documents being released on youth and crime each containing its own proposals these were first published in Tackling Youth Crime, Reforming Youth Justice (Labour 1996). To start this essay I will first discuss Labours 1997 White Paper, No more excuses: A new approach to tackling youth crime in England and Wales, where policy was laid out and then later legislated in The Crime and Disorder Act 1998. From this I will evaluate the weaknesses and strengths of the various elements of this policy which will include the aims of the youth justice system. Then in the second part move to evaluate the abolition of the doli incapax, the reparation order and parenting order. Thirdly I will evaluate the child safety order, local child curfew, final warning scheme, action plan order. The fourth part will be an evaluation of the detention and training order and new arrangements for secure remands of 12-16 year olds. And finally the establishment of the Youth Justice Board for England and Wales, Youth Offending Teams and the duties of the local authorities and other agencies to make sure the availability of the appropriate youth justice services. And then finally bring all my findings together to produce a clear and comprehensive conclusion; which I believe has many strengths and some weaknesses. The Labour government's 1997 White paper, No more excuses: A new approach to tackling youth crime in England and Wales is a document which sets out labours programme of reform for the youth justice system in England and Wales, it aims are "a clear strategy to prevent offending and re-offending, that offenders, and their parents, face up to their offending behaviour and take responsibility for it, earlier, more effective intervention when young people first ...read more.

But on no grounds must 2 final warnings be given. The strength of this is that it lets the offender know that they will be strict and will not put up with it again a final warning is a final warning. Also an action plan order which is like a community penalty for young offenders, this is a small, rigorous programme where community intervention is used combined with punishment and rehabilitation so that the offender's behaviour can be changed and more crime can be stopped. The strength in this lies in the way that it uses various methods simultaneously like community intervention, punishment and rehabilitation which can only increase the chances of success. Moving onto and new arrangements for secure remands of 12-16 year olds. The Home office (1997) state that the government should have undeniable powers to remand to secure accommodation. For young people who are of the age 10-16 and are awaiting trial. And so The Criminal Justice Act 1991 and the Criminal Justice and Public Order Act 1994 included in its provisions to amend the Children and Young Persons Act 1969 which was to allow courts to remand 12-16 years olds directly to secure local authority accommodation with certain conditions. But this was not put into operation. The conservatives had started a building programme which was for 170 new local authority secure places, there completion date was 1998. But Labour said that these would be not enough. And so declared to use the Crime and Disorder Bill to implement court ordered remand power on some groups of youths. Priority would be gives to 12-14s then girls of the age 15 and 16 and also boys of that age when places become available. This is due to courts believing that these children are vulnerable and they are emotionally and physically immature and so there is a danger that they could harm themselves, this is also strength as it recognises that they are still young but this also does contradict other policies in this White Paper which it does on many levels. ...read more.

Then the local child curfew's strength lies in the way it involves the local community so determining what's best for the members of their own community. Then there is the final warning where the strength in this lies in the way that it uses various methods simultaneously like community intervention, punishment and rehabilitation which can only increase the chances of success. Which brings me to secure remands of 12-16 year olds which is also a strength as it recognises that they are still young but this also does contradict other policies in this White Paper which it does on many levels, the detention training programme has strength because it does not just impose a detention where by this can harden the youth and in some cases lead to a life of crime but with the community supervision would let the offender know that they have been given a chance to mend their ways. The forming of the YOTs and YJB is strength as it brings together all the agencies under one roof you could say, and so the aims are understood by all and are the same this can only help, and managerialism is strength as it can be more efficiently run with professionals in charge. Now I will just conclude my findings of the weaknesses which are; the abolition of the doli incapax to me is a weakness as it manages not to take the child's age into consideration and this can be seen just by looking at the rest of Europe, are the children in the UK not the same. Another weakness is the ASBO to lock youths in their houses and stop them from going into certain locations can work but does not address the real problem, and Labour could try and find the cause of these problems as this to me is just breeding further adult criminals and as we have seen lately getting an ASBO is something to be proud off and to show off so demoralising the order entirely. There are strengths and weaknesses in this policy but I have found the strengths outweigh the weaknesses. ...read more.