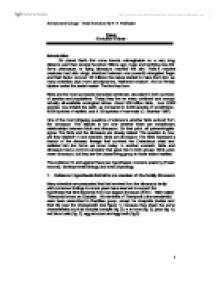 Essay -Evolution of birds- Introduction On planet Earth first come insects unimaginable on a very long distance past then several hundred millions ago, huge and terrifying new life forms pterosaurs or flying dinosaurs reached the airs. These massive creatures had skin wings stretched between one powerful elongated finger and their flanks. Around 150 millions the nature started to make them into, as many scientists says more aerodynamics, feathered creature. And so flimsily biplane ceded the aerial master. The bird has born. Birds are the most successful terrestrial vertebrate, abundant in both numbers of species and populations. Today they live on every continent and occupy virtually all-available ecological niches. About 300 billion birds, over 9,000 species, now inhabit the earth, as compared to 3,000 species of amphibians, 6,000 species of reptiles, and 4,100 species of mammals (C. Shankar 1997) One of the most intriguing questions of science is whether birds evolved from the dinosaurs. The dispute is not over whether there are evolutionary relationships between birds and dinosaurs. On that point, all paleontologists agree. The birds and the dinosaurs are closely related. The question is, how are they related? In one scenario, birds are dinosaurs. The birds represent a branch of the dinosaur lineage that survived the Cretaceous crisis and radiated into the forms we know today. ...read more.

Archaeopteryx (see the fossil pictures below) had three toes armed with claws and long, strong legs. Clearly it walked and perched like a bird. Its head had the reptilian feature of jawbones. Its spine was extended into a bony tail - just like a reptile's. On both sides of the tail bones, clearly visible, were the clinching characteristics of birds - feathers. Photo1 Archaeopteryx (Jay 2000) Photo 2 Archaeopteryx (jay 2000) Archaeopteryx was unmistakably a winged and feathered, two legged creature, and as its similarity to two-legged dinosaurs is apparent it is obvious that birds and dinosaurs are closely related. No doubt was Archaeopteryx able to fly, of which its well-developed wings were evidence. And as feathers and wings must have taken a very long time to evolve, and as Archaeopteryx is likely not to have been the only one of its kind, it can safely be concluded that at that time existed feathered, flying bird-like vertebrates, closely related to dinosaurs. 2. Evidence / hypothesis against the birds raising From dinosaurs In the following years were nevertheless a great number of theories such as the Alan Feduccia (F. Alan 1996) forwarded on the evolutionary origin of birds and on the relation of birds to dinosaurs, which he admitted the evolution is through convergent way ("step by step evolution"), by witch two independent group grow to look ...read more.

Birds aren't just descended from dinosaurs - they are dinosaurs. Because of this realization, we registered our aviary as the Theropod Aviary in honour of the continued existence of these animals, so different from humans, that have fascinated so many of us for so long. At the end the evidence that birds descended from dinosaurs - indeed are dinosaurs - has become irrefutable for most palaeontologists and evolutionary biologists. A few scientists reject the dinosaur-bird connection. They see the similarities as convergent evolution - the development of like traits in separate species. The flight and feather origin is another controversy issue, there is no basic evidence or traits that the fossils records shows it but ended others scientists such as Palm illustrated in is theory that the pre- birds (not birds) had evolved through the nature the requisites to flight. Today a cladograms for the lineage leading from theropods to birds shows that the clade labelled Aves (birds) consists of the ancestor of Archaeopteryx and all other descendants of that ancestor. The cladogram shows that birds are not only descended from dinosaurs, they are dinosaurs (and reptiles) - just as humans are mammals, even though people are as different from other mammals as birds are from other reptiles. Undoubtedly birds are from the linkage of origin of reptiles but there is a lot to investigate in relation of flight and feather origin. ...read more.