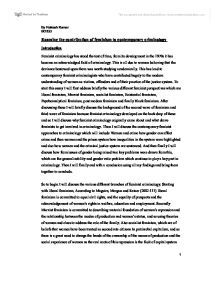 Examine the contribution of feminism to contemporary criminology

Examine the contribution of feminism to contemporary criminology Introduction Feminist criminology has stood the test of time, from its development in the 1970s it has become an acknowledged field of criminology. This is all due to women believing that the deviance bestowed upon them was worth studying academically. This has lead to contemporary feminist criminologists who have contributed hugely to the modern understanding of women as victims, offenders and of their practice of the justice system. To start this essay I will first address briefly the various different feminist perspectives which are liberal feminism, Marxist feminism, socialist feminism, Existential feminism, Psychoanalytical feminism, post modern feminism and finally Black feminism. After discussing these I will briefly discuss the background of the second wave of feminism and third wave of feminism because feminist criminology developed on the back drop of these and so I will discuss why feminist criminology originally came about and what drove feminists to get involved in criminology. Then I will discuss the contemporary feminist approaches to criminology which will include Women and crime how gender can affect crime and then women and the prison system how inequalities in the system were highlighted and also how women and the criminal justice system are sentenced. And then finally I will discuss how from issues of gender being raised two key problems were drawn from this, which are the generalizability and gender ratio problem which continue to play a key part in criminology. Then I will finally end with a conclusion using all my findings and bring them together to conclude. ...read more.

So during this period of third wave feminism, feminist started to influence or contribute in the way that they wanted to, this is where intersectionality comes into the subject. A, B, Proctor. (2006:5) describes how intersectionality recognized the processes of race, class, power and gender and that they are not one dimensional and can exist simultaneously and have a clear bond with each other and the experience can be felt together. Another contribution being made at this time was that feminist criminologists were recognizing the need for intersectionality; he gives the example of Daly and Stephens (1995) this approach of studying crime could also look at how class, race, gender, age and sexuality make the normal and the deviant. And how these differences can put other members of society at risk of being made deviant or to break the law and so the law is reproducing them, it is contributions like these that can help criminologists understand and transform theories. This second phase is also discussed by Daly, K. Maher, L. (1998:3) who suggest that there were some major changes that took place in this period of time, such as "feminist scholars referred to women or to women's experiences in an unreflective way. They stressed the importance of distinguishing biological sex from socio-cultural gender, and of developing a comprehensive feminist theory that might replace liberal, Marxist, or psychoanalytic theories. These efforts became untenable in the 1980s with critique and challenge from two sources: women marginalized by feminist theory (e.g., women of colour and lesbians) ...read more.

Conclusion What I have found is that feminism has contributed to feminism, the contribution is diverse and has a range of scope and is of a rich material. Because of feminism many questions have been turned on their head and the various studies that have been conducted have helped change the lives of many women and also have changed the way world of crime is studied. This essay shows the many different and rich feminist perspectives that have influenced criminology like liberal feminism, Marxist feminism, socialist feminism, Existential feminism, Psychoanalytical feminism, post modern feminism and finally Black feminism. The essay has also looked into how contemporary feminist criminology has developed in phases alongside feminism and how it has contributed and what the reasons were initially for feminists to involve themselves in this field like equal opportunities. Also discussed was Women and crime where this essay managed to show using various studies that there are many differences between the genders when it come to the crimes that are committed and how women carefully consider their options when they commit crime. What also has come light is that women in the prison system face many inequalities in such things as education and training but also how old views of women being treated leniently by courts when sentencing is a myth but can be seen when sentencing women that do not conform to their natural roles as mothers and wives. In contemporary time's criminology or feminist criminology now focus their attention on key problems the generalizability and gender ratio problem which this essay has found to be a key area for present and ongoing research for feminist criminology and criminologist alike. ...read more.