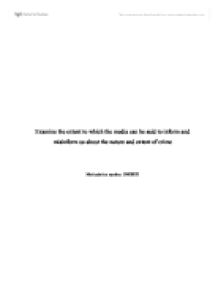 Examine the extent to which the media can be said to inform and misinform us about the nature and extent of crime.

Examine the extent to which the media can be said to inform and misinform us about the nature and extent of crime Matriculation number: 10008032 Worldwide, the media is recognized as the fourth estate, seriously affecting public opinion. In a democratic society the media plays an important social function - informs the public about the political, social, criminal, economical and other problems. Without media we would know nothing. In this respect the media's interest in all topics of interest to us is a natural and justifiable thing. On the other hand media have motive and methods by which they distort information and misinform the public. Firstly this essay will try to examine the extent to which the media inform and misinform people about the nature and extent of crime through sensationalism and selective reporting and secondly this essay will look how online newspapers represent domestic violence crimes. Everybody agree that media is a significant informant, the primary source to get information about what's happening in the world. It draws our attention to social issues, provides a picture of events that people do not experience directly, teach people about their society and people who are outside their social groups, moreover helps structure how people see the world (Bullock & Cubert, 2002). Today media is all about crimes and as a result crime consumes an enormous amount of media space. TV schedules, films in cinemas, headlines in newspapers indicate that general population is fascinated or even obsessed in crimes and criminal behaviours (Marsh, Cochrane & Melville, 2004). ...read more.

Journalists are not interested in common crimes, involving the usual victims, they are interested of what makes a good story that their audience wants to know about They concentrate on unusual, ingenious, vicious and audacious crimes like bloody murders or maniacs, cannibals (Reiner, 2002). The likelihood that a story will be reported lies on 'visible or spectacular act', 'political or sexual connotations', 'graphic presentation', 'individual pathology,' or contain any traces of 'deterrence or repression'. Reported story must call into question a moral boundary defined by 'good' adults. That means the story must be unusual, violent, scary and emotional, crime must be done by stranger, preferably have sexual connotations, victim must be vulnerable (old, young, female, child) and crime must occur in unusual place like lift or school (Chibnall, 1977). Moreover selective reporting leads to a result that some crimes receive more press coverage than others and can provoke the public to have an exaggerated and misguided fear of crimes. If media concentrates on one or two particular crimes like forcible rape or child abuse people may think that these crimes are increasing with great speed, this perception creates fear, hysteria or moral panics among people, leads to negative stereotypes about particular groups and supports draconian measures against it; for example, 'Name and Shame' campaign led to violence against innocent people who have been mistaken for paedophiles (Sarah's parents back 'name and shame', 2000). ...read more.

Furthermore in cases of homicide-suicides, in which the abusers kill themselves, reporters often label the case as a family tragedy, like in an article 'A FAMILY TRAGEDY\Glendale father arrested in fire that killed 7' and are less likely to frame the case in terms of domestic violence, even when evidence of prior domestic violence exist (Bullock & Cubert, 2002). A lot of articles are concentrated on writing that domestic violence happens to certain types of families: poor, problematic families (drug addicts, alcoholics), working class or ethnic minority families, creating stereotypes and opinions, not showing that domestic violence has nothing to do with age, looks, economic status, race, education, gender or religious backgrounds. Some articles are focused on culture differences when reporting on individual murders like in articles 'Egyptian TV presenter kills his wife' or 'Muslim husband who killed his wife and children because of their Western ways' leaving the reader with the false impression that intimate partner homicides may be confined to only parts of the population (Bullock & Cubert, 2002). To conclude, this essay showed how media inform and misinform people about the nature and extent of crimes and examined how newspapers represent domestic violence crimes. To resume, media do inform people about crimes, but because of need to earn money they use sensationalism and selective reporting which present a distorted and inaccurate view of crimes. Moreover evidence show that newspapers try to break the public silence around domestic violence cases but unfortunately they lack professionalism and broader understanding what is domestic violence. That's why many newspapers draw inaccurate, incomplete and potentially misleading picture of domestic violence fatalities. ...read more.