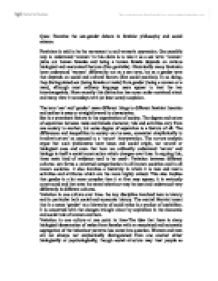 Examine the sex-gender debate in feminist philosophy and social science.

Ques: Examine the sex-gender debate in feminist philosophy and social science. Feminism is said to be the movement to end women's oppression. One possible way to understand 'woman' in this claim is to take it as a sex term: 'woman' picks out human females and being a human female depends on various biological and anatomical features (like genitalia). Historically many feminists have understood 'woman' differently: not as a sex term, but as a gender term that depends on social and cultural factors (like social position). In so doing, they distinguished sex (being female or male) from gender (being a woman or a man), although most ordinary language users appear to treat the two interchangeably. More recently this distinction has come under sustained attack and many view it nowadays with (at least some) suspicion. The term 'sex' and 'gender' mean different things to different feminist theorists and neither is easy or straightforward to characterize. Sex is a prominent feature in the organization of society. The degree and nature of separation between male and female character, role and activities vary from one society to another, but some degree of separation is a feature of all. The differences and inequalities in society can be seen, somewhat simplistically to involve'nurture' as opposed to a 'nature' interpretation. The nurture analysis argue that such phenomena have bases and social origin, not natural or biological ones and even that how we ordinarily understand 'nature' and biology is itself a social construction which changes over time. In arguing this, three main kind of evidence tend to be used-: Variation between different cultures- sex forms a universal categorization in all known societies and in all known societies it also involves a hierarchy in which it is men and men's activities and attributes which are the more highly valued. This also implies that gender is a lot more complex than it at first may appear, it is variously constructed and that even the same behaviour may be seen and understood very differently in different cultures. ...read more.

Masculinity is defined as sexual dominance, femininity as sexual submissiveness: genders are "created through the eroticization of dominance and submission. The man/woman difference and the dominance/submission dynamic define each other. This is the social meaning of sex". For MacKinnon, gender is constitutively constructed: in defining genders (or masculinity and femininity) we must make reference to social factors. In particular, we must make reference to the position one occupies in the sexualized dominance/submission dynamic: men occupy the sexually dominant position, women the sexually submissive one. As a result, genders are by definition hierarchical and this hierarchy is fundamentally tied to sexualized power relations. So, gender difference for MacKinnon is not a matter of having a particular psychological orientation or behavioural pattern; rather, it is a function of sexuality that is hierarchal in patriarchal societies. This is not to say that men are naturally disposed to sexually objectify women or that women are naturally submissive. Instead, male and female sexualities are socially conditioned: men have been conditioned to find women's subordination sexy and women have been conditioned to find a particular male version of female sexuality as erotic - one in which it is erotic to be sexually submissive. For MacKinnon, both female and male sexual desires are defined from a male point of view that is conditioned by pornography. Bluntly put: pornography portrays a false picture of 'what women want' suggesting that women in actual fact are and want to be submissive. (Mackinnon ; 1989) The crux of Butler's argument in Gender trouble is that coherence of the categories of sex, gender and sexuality- the natural seeming coherence for example, of masculine gender and heterosexual desire in male bodies is cultural construction through repition of stylized acts. These stylized bodily acts in their repition establish the appearance of essential ontogical "core" gender. This is the sense in which bulter famously theorized gender along with sex and sexuality. ...read more.

The various critiques of the sex/gender distinction have called into question the viability of the category women. Feminism is the movement to end the oppression women as a group face. But, how should the category of women be understood if feminists accept the above arguments that gender construction is not uniform, that a sharp distinction between biological sex and social gender is false or (at least) not useful, and that various features associated with women play a role in what it is to be a woman, none of which are individually necessary and jointly sufficient, like a variety of social roles, positions, behaviours, traits, bodily features and experiences. Thus one cannot have a clear cut understanding of the distinction, with different opinions flowing in. The feminist arguments against biological determinism and the claim that gender is socially constructed , that gender - or what it is to be a woman or a man - is still very much a live issue. Feminists have not entirely given up the view that gender is about social factors and that it is distinct from biological sex. The jury is still out on what the best, the most useful or the correct definition of gender is. Reference: * Liz Stanley , Should 'Sex' really be 'Gender'-or 'Gender' really be 'Sex'?, In R. Anderson and W. Sharrock (eds) Applied Sociology. London, Allen and Unwin; 1984. * C. West and D.H. Zimmerman," Doing Gender", Gender and Society; 1987. * Judith Butler; Gender Trouble, New York: Rutledge; 1990 * Alex Hughes and Anne Witz ; "feminism and the Matter of bodies: from De Beauvoir to Butler", Body and Society; 1997. * V. Plumwood; Do We Need Sex/Gender Distinction? , Radical Philosophy; 1989. * Gary Goertz and Amy G. Mazur; Politics, Gender and Concepts, Cambridge University Press; 2008. * Nancy Chodorow , Reproducing Mother; 1995 * Troil Moi, What is a Women, Basil Blackwell; 1999. * Stevi Jackson and Sue Scott; Gender: A Sociological Reader, Routledge; 2002. * Meenakshi Thapan; living the Body: Embodiment, Womanhood and identity in Contemporary India; 2009. ...read more.