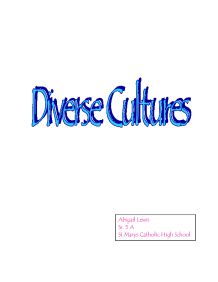 Examine with reference to language how Attia Hosain presents the feelings of the young wife in her first encounter with western culture?

Examine with reference to language how Attia Hosain presents the feelings of the young wife in her first encounter with western culture? "The First Party" is a fusion short story bringing together the western and the Asian cultures. It is about a conventional bride who has her first encounter with her husband's 'emancipated' friends. Attia Hosain one of the earliest women writers of the Indian diaspora, through "The First Party," portrays the mannerisms and beliefs of the typical Indian bride through this newly wedded bride. To each turn of the story, Attia Hosain brings a superb imaginative understanding and a sense of the "poignancy of the smallest of human dramas." The short story reveals the hidden depths of Hosain's work and brings out not only the partition theme but also the dilemma of the Indian bride and her relationship with her husband. Ones first party is supposed to be a really exciting, unforgettable and enjoyable experience. However here the title suggests the irony of the situation. As east meets west, the experience turns out to be a very traumatic one. The Indian bride could be equivalent to the olden day western woman - delicate, meek and humble, expected to cater to the world of man and inexperienced to the nuciences of the world. The bride's entry into the house of the party is just as her entry into her in - laws home for the first time. ...read more.

Animal imagery is used to convey her thoughts about the people and also about the situation she was in. She refers to them as "strange creatures," even though they were her own people, she observed them like as if they were from another planet. She compares the woman's "claws dipped in blood" to her own, which were unpainted and cut very short. In rural India, food was said to be enjoyed better if had with the fingers, as then none of the taste would be wasted on the spoons and forks. She has kept her nails short so as to not let them get dirty, as she has to eat with them. Her modesty was like a controlling device, which "put a leash on her thoughts." Even though the dancing was suggesting indecency, she could not bring herself to think indecent thoughts, as women from her culture were not to think, act or speak indecently. The bride, just like a child, keeps relating the things and persons at the party back to her motherland. We realise that she must have been very enclosed and we learn this from her old fashioned way of thinking. The tone of the story changes as her feelings evolve. We see how "her nervousness edged towards panic" and with uncertainty a "shy glance" and then "coldly self conscious." The "pinpoints to discomfort" soon changes to "discomfort multiplied." ...read more.

What is admirable about this woman is that she does not give up her beliefs, even for the sake of her husband in order to feel more comfortable and fit in. Her customs do not saturate even though she is in contact with a different culture who actually came from where she came. She wants to be a good wife and share in her husband's happiness but her will power not to indulge in ways she does not accept shows that she will not perspire when her beliefs are questioned. Though she is very rigid in her attitude, and unchanging in her ideas, I empathize with her as I myself would find it very difficult to adapt to new ways so soon. Maybe if there were some sort of induction day then she would have reacted better. I take pity on her repressive Indian condition. She thought that marriage would be an escape from the fixtures her family held her in but what a disappointment it turned for her. She thought that it would be an adventure, which she would go along happily for. Little did she know that it would be her mother's traditions and strictures that would be holding her back in this new place as well. She would have felt less left out if her approach were less judgmental and more to 'live and let live'. Attia Hosain has indeed made a statement about the Indian woman. The Indian woman is strong, just, faithful, beautiful, a good wife, a good mother, and a role model for women of all cultures. ...read more.