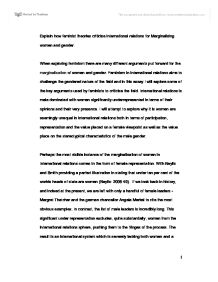 When exploring feminism there are many different arguments put forward for the marginalisation of women and gender. Feminism in international relations aims to challenge the gendered nature of the field and in this essay I will explore some of the key arguments used by feminists to criticise the field. International relations is male dominated with women significantly underrepresented in terms of their opinions and their very presence. I will attempt to explore why it is women are seemingly unequal in international relations both in terms of participation, representation and the value placed on a female viewpoint as well as the value place on the stereotypical characteristics of the male gender.

Perhaps the most visible instance of the marginalisation of women in International relations comes in the form of female representation. With Baylis and Smith providing a perfect illustration in stating that under ten per cent of the worlds heads of state are women (Baylis: 2008 49).  If we look back in history, and indeed at the present, we are left with only a handful of female leaders - Margret Thatcher and the german chancellor Angela Merkel to cite the most obvious examples. In contrast, the list of male leaders is incredibly long. This significant under representation excludes, quite substantially, women from the international relations sphere, pushing them to the fringes of the process. The result is an international system which is severely lacking both women and a female viewpoint.

Therefore, an international system that is overwhelmingly dominated by men can be seen to result in a system which does not take care of, or promote, the interests of gender. Jill Steans questions just how well a supposed national policy can represent the views of women when it is in fact a policy that is composed by men and, more than this, the male elite (steans: 1998 49). It is Liberal feminism which explores the implications of a limited number of women in international institutions.  Whilst international policy is made by males and enacted by males, it is fundamentally unrepresentative of women or their views. It fails to account for women and instead further supports the male ideal. With women not involved in policy making it is very hard for them to make their voices heard or opinions known. Consequently, what is perhaps often seen as a national policy or a policy reflective of the population is perhaps wholly inadequate in its representative function.

As a result, one may begin to question why women do not occupy the mainstream of international relations and attempt to occupy leaders positions rather than remain on the fringes. It is argued that it is the tradition of the state and the “national identity” that keep a women in a subordinate place that is viewed as being proper and correct. Kandiyoti  puts forward the idea of women often being held as the image of a nation (Kandiyoti: 1992 431). This image of a woman who belongs to all of us and is in turn protected and held as dutiful. It is recurring images such as these that create the ingrained view of the role a woman is supposed to occupy. Women are not supposed to be career led and fighting for democracy. They are supposed to be dutiful, according to the national image, as nurturers that stay at home and take care of the family unit. Women are supposedly the nurturers that are protected by men and as such, over time, women have been taught to feel like it is right and proper for them to stay away from Politics and remain in the role that they have been taught to occupy.

Furthermore, some claim that the role of women in private life results in a situation in which women are more tuned to the roles and responsibilities of this private life whilst men are best suited to the roles and responsibilities that come with public and political life. This is a claim quickly dismissed by Dietz who claims that this belief is no more than an image created over time which further supposes what the role of women and men are supposed to be (Dietz: 1987 4). Once again it is claimed that a woman’s role as the overseer of private life is no more than a construct by the male bourgeoisie. This marxist feminism which explores the oppression  of females by the male upper class then, suggests that women are just as suited to public life as men but, in contrast to men, they are not given the opportunities so abundant to those that find themselves in the male bourgeoisie.

As such, women are confined to roles which are not recognised in the mainstream. Working in the home and in unregulated roles, women are largely overlooked. This is perhaps best explored through standpoint feminism. In this sense women are perhaps not credited with the role they play in international relations. Women, as first ladies, diplomats wives, and so on are hugely supportive and perhaps essential for the international system. They make male dominated international relations possible yet at the same time are not given the chance to influence the field themselves and instead are, cast into background roles and supportive roles. This is a view associated with Cynthia Enslow who suggests that women are not credited with the role they play and more than this she states that international relations as we see it simply wouldn’t work without women supporting men (Enslow: 2000 123) . Women are capable of playing a role other than that of supporting the leader and have shown it in the past but they simply have not been given the opportunities in the face of male oppression.

Consequently, women are unable to occupy a field with which their composition is not compatible. Tickner suggests that international relations is a celebration of male power. Not only is the field dominated by males but it is a celebration of masculinity. Tickner defines this situation as “hegemonic masculinity” (Tickner: 1992 7) . In what can be labelled as feminist empiricism, the most interesting argument is the suggestion that this praise of masculinity is in fact a model of manhood that few men themselves fulfil. This model of manhood, that is held up as rightful, maintains its superiority through the marginalization of supposedly lesser forms of masculinity in the form of homosexuality and feminine attributes. This shocking claim then would appear to suggest that international relations is held up as a triumph of manhood. Women are excluded from this sphere and men must deny their feminine attributes if they are to succeed. Perhaps in order to clarify this argument we can give an example in the form of homosexual persecution in the armed forces throughout the world. Whilst Countries such as the UK and Israel are indeed liberal to the point of including homosexuals in the military. Some of the worlds largest powers in the form of the United States for instance, still preclude gay men and women from serving their Country.

Dietz M (1987) ‘Context Is All: Feminism and Theories of Citizenship’, Learning about women: Gender, Politics and Power 116/4

Youngs, G ‘Feminist International Relations: a contradiction in terms? Or: why women and gender are essential to understanding the world ‘we’ live in’, International Affairs 80/1: 75-87 (85)