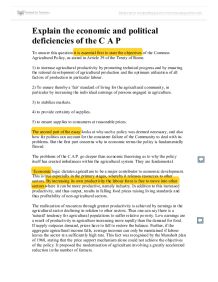 Explain the economic and political deficiencies of the C A P

Explain the economic and political deficiencies of the C A P To answer this question it is essential first to state the objectives of the Common Agricultural Policy, as stated in Article 39 of the Treaty of Rome. 1) to increase agricultural productivity by promoting technical progress and by ensuring the rational development of agricultural production and the optimum utilisation of all factors of production in particular labour. 2) To ensure thereby a 'fair' standard of living for the agricultural community, in particular by increasing the individual earnings of persons engaged in agriculture. 3) to stabilize markets. 4) to provide certainty of supplies. 5) to ensure supplies to consumers at reasonable prices. The second part of the essay looks at why such a policy was deemed necessary, and also how far politics can account for the consistent failure of the Community to deal with its problems. But the first part concerns why in economic terms the policy is fundamentally flawed. The problems of the C.A.P. go deeper than economic theorising as to why the policy itself has created imbalances within the agricultural system. They are fundamental. `Economic logic dictates agriculture to be a major contributor to economic development. This is true especially in the primary stages, whereby it releases resources to other sectors. By increasing its own productivity the labour force is free to move into other sectors where it can be more productive, namely industry. ...read more.

Even the 1992 MacSharry reforms, seen as a big step forward, may have little impact. Here one of the key elements is the removal of about 10% of E.C. farming land from production. But leaving aside the fact that it is notoriously difficult to tell if land is being farmed or not, farmers will always leave the least productive land fallow and then claim their subsidy for doing so. More specific deficiencies of course also exist. The C.A.P. has failed to check the disparate income distribution within the community. In fact it has exacerbated it, benefitting the larger, richer producer in the more prosperous region versus the 'peasant', the people the policy was supposed to aid. This is because the system rewards farmers in proportion to output, i.e. size and wealth, as opposed to need. Incomes have not risen in relation to Community incomes. In 1989 a Commission paper stated, "since 1978, under the pressure of the structural surpluses, producer prices have fallen in real terms, or at best held steady. As a consequence, the average real incomes of European farmers in 1988 was below the level of the mid-1970's."1 But as stated the problems of the C.A.P. are more fundamental than this. The basic problem is that the policy as a whole attempts to defy the underlying forces of economic development. ...read more.

It has become a symbol of co-operation. 'Fine tuning' of the policy is permitted, but any attempt at a radical restructuring or abolition altogether would not be tolerated, and perhaps seen as a sign a defeatism. For these reasons politics has failed to remedy the situation. As in most areas the concepts of politics and economics are intrinsically linked, this is also the case with the C.A.P. The 'Farm Problem' has economic and social dimensions. For many the C.A.P. is in direct defiance of all economic logic and against the long term interests of the Community. But against this low incomes in a 'major' sector of the economy are unacceptable in the twentieth century. Continued friction has and could continue to make the policy a major force for disintegration, as opposed to its original aims, to foster integration, being the first major policy. The C.A.P. has also been a major drain on the resources of the Community, at its peak accounting for over 80% of the budget. This has since fallen, and in 1992 accounted for 58.2%.8 The consequence of this has been few resources left to pursue other common policies, delaying the progression of the Community as a whole. But as we have seen the 'social' aspect of the 'Farm Problem' made some sort of policy necessary. This factor and those mentioned above have perpetuated the C.A.P. Politicians have been unable and unwilling to reform the complex bureaucratic web that is the C.A.P. ...read more.

This is not a particularly strong essay and would achieve a mark in a lower classification were this marked for submission to my University. There are four primary reasons for this:

The structure of the essay is weak, and there is therefore no sustained analysis of the sort necessary to gain a mark in the higher classification boundaries. There is no introduction to speak of, which is a major problem. This is compounded throughout by the fact that the paragraphs are of an uneven length (and sometimes are barely paragraphs at all) and so lack an internal structure which might be able to carry a narrative. Points are introduced seemingly at random throughout the essay and aren't expanded on to the extent that would be necessary to make it clear what role they play within the argument. Indeed, where there are points of structure or 'signposting' they are often back to front, which doesn't aid matters. In an essay on a structure such as the CAP, which is enormously complex and convoluted, it is especially important to spell out a roadmap of what kind of information you will include.

Only the second half of the essay appears to be referenced. Unless it was made clear by the marker that it was not an expectation that the essay should be referenced, this is also problematic. As a general rule of thumb, every paragraph in an essay of this sort should contain at least one reference. The bibliography is also insufficient and lacks date/publisher information.

Evidencing is quite poor, which itself is a function of the referencing. Where data is provided it isn't clear where it has been obtained, and case study substantiation is either non-existent (for most of the essay) or inappropriately detailed with insufficient explanation of its necessity to back up the argument (as in the case of France towards the end of the essay). Evidence should be used consistently, wherever a point requires it, and it should be obvious why the evidence used is appropriate.

I am not sure when this essay was written, but references to the GATT and the dates of the bibliographic material would suggest mid to late 1990s. If this question were to be answered now, a candidate would be expected to show familiarity with key recent developments, such as the Doha WTO round, the Agenda 2000 reforms, and the pillar system.