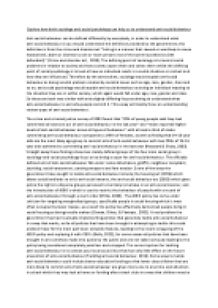 Another sociologist explains anti-social behaviour as a product of labelling; delinquent subcultures and anti-social behaviour is described as being a result of society labelling sub-cultures as deviant which in turn means they react to the labels with frustration (Cohen, 2002). The most prone to being labelled is white working class young men, they are considered to be turned into folk devils by the public and the media which creates a moral panic about the particular sub-culture. Often once labelled as something by the media and the public members of the sub-culture conform to their label and commit crimes, an example of this are mods and rockers who were for all intents and purposes generally peaceful until the media said otherwise and amplified the crime; riots created by the two sub-cultures ensued. In addition to this the same sociologist discusses crime as a produce of status frustration, going on to say that working class youths? realise that they are unable to achieve societal set goals so they resort to crime in order to gain status and resources. Therefore sociology would explain anti-social behaviour as a result of labelling and status frustration. On the other hand social psychology offers more insight into why individuals may commit anti-social behaviour, psychologists believe that behaviour is a direct result of genetics or learned behaviour, otherwise known as the nature vs nurture debate. On the biological side of the argument anti-social behaviour specifically in males is noted as being down to factors such as high testosterone levels and research suggests there is possibly an aggressive gene that people can inherit from parents (Craig & Halton, 2009). ...read more.

The two boys Jon Venables and Robert Thompson were known trouble makers which indicates anti-social behaviour. The media reported that the two boys had supposedly played violent video games and watched the film child?s play 3 in which there are scenes that correspond with the torture and murder of James Bulger which included throwing blue paint on the victim (Kirby, 1993). Although there was no real evidence that linked the events that had occurred with violent video games or films a moral panic about ?video nasties? was a direct result of the case, in addition to this it was clear that both children had a difficult upbringing and social care was poor at the time which could easily have resulted in an environment that created two boys with extreme anti-social behavioural problems. This shows evidence of learned behaviour in a cultural context which allows psychologists to understand anti-social behaviour. In conclusion, Sociology and Social psychology provide explanations that are only moderately different, sociology helps to explain and understand anti-social behaviour by looking at how society reacts to individuals and how groups relate to anti-social behaviour for example working class young men are a particular focus of sociologists in relation to understanding anti-social behaviour, while psychology focuses on how individuals react and what causes individual people to commit anti-social behaviour which is predominately a focus on nature vs nurture, how environments can shape young people to do certain things which can be positive or negative depending on their upbringing and the social situation as well as having a biological factor which may be over looked by sociologists. ...read more.