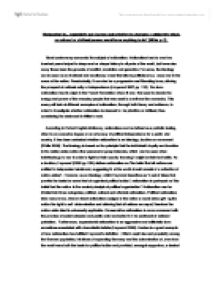 Nationalism is... essentially sub-human and primitive in character, a deformity which no rational or civilised person would have anything to do . Discuss.

'Nationalism is... essentially sub-human and primitive in character, a deformity which no rational or civilised person would have anything to do" (Miller p. 5) Great controversy surrounds the subject of nationalism. Nationalism has for over two hundred years helped to shape and re-shape history in all parts of the world, but have also many times been the grounds of conflict, revolution and genocide. For some, the ideology can be seen as an irrational and reactionary creed that allows politicians to pursue war in the name of the nation. Paradoxically, it can also be a progressive and liberating force, offering the prospect of national unity or independence (Heywood 2007 pp. 115). The term nationalism has its origin in the French Revolution where it was first used to denote the energy and power of the everyday people that was used to overthrow the monarchy. This essay will look at different examples of nationalism, through both theory and evidence, in order to investigate whether nationalism is deemed to be primitive or civilised, thus considering the statement in Miller's work. According to Oxford English dictionary, nationalism can be defined as a patriotic feeling, often to an excessive degree or an advocacy of political independence for a particular country. It has been contested whether nationalism is an ideology, doctrine or movement (White 2008). The ideology is based on the principle that the individual's loyalty and devotion to the nation-state outdo other personal or group interests, which can be seen when individuals go to war in order to fight for their country knowing it might be their last battle. ...read more.

If this is true, how come Miller mentions nationalism to be sub-human and primitive? Looking closer at self-determination, we can recognize several nations without a state, for instance the Kurds, who are internationally recognized as nation without a state, but are a minority within other states (Hannum 1996). It is difficult to determine whether all minorities within states have grounds for self-determination, since it is hard to know where to draw the line for what is acceptable so that a reasonable order can be kept. If all nations and cultural groups would demand a state of their own, this would cause, as Miller fears, chaos of nations claiming self-determination possibly leading to war, as seen in the Palestinian-Israeli conflict. However, not all cultural groups demand a nation, or state, of their own, and it can be concluded that at any given time, not all nationalistic tendencies can be fulfilled. In order to investigate further whether the statement in Miller's work is correct, or just an explanation of a harmful branch of nationalism, we need to look into the theories concerning nationalism. One can distinguish between liberal and illiberal nationalism defined by Spencer and Wollman (1998), where they describe the liberal form as "nationalism [which] recognises the rights of other nations to exist... it sees national commitments as understandable and legitimate", which, again, follows the lines of the right to self-determination. One of the most classical authors on liberal nationalism, John.Stuart Mill, agrees with this notion claiming nationalism to be "the essential condition of ...read more.