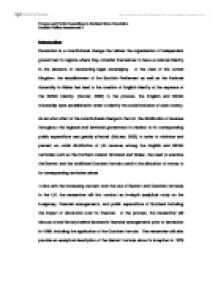 Introduction Devolution is a constitutional change that allows the organisation of independent government in regions where they consider themselves to have a national identity in the absence of transferring legal sovereignty. In the case of the United Kingdom, the establishment of the Scottish Parliament as well as the National Assembly in Wales has lead to the creation of English identity at the expense of the British identity. (Condor, 2006) In the process, the English and British citizenship were established in order to identify the social inclusion of each society. As an after effect of the constitutional change in the UK, the distribution of revenue throughout the regional and territorial government in relation to its corresponding public expenditure was greatly affected. (McLean, 2003) In order to minimise and prevent an unfair distribution of UK revenue among the English and British territories such as the Northern Ireland, Scotland and Wales, the need to examine the Barnett and the traditional Goschen formula used in the allocation of money to its corresponding territories arises. In line with the increasing concern over the use of Barnett and Goschen formulae in the UK, the researcher will first conduct an in-depth analytical study on the budgetary, financial arrangements, and public expenditure of Scotland including the impact of devolution over its finances. In the process, the researcher will discuss a brief history behind Scotland's financial arrangements prior to devolution in 1999, including the application of the Goschen formula. The researcher will also provide an analytical description of the Barnett formula since its inception in 1978 and subsequent revival in 1992. The researcher will also examine the strengths and weaknesses of using the Barnett formula versus the Goschen formula. The Budgetary, Financial Arrangements and Public Expenditure of Scotland As stated in the third edition of the Statement of Funding Policy that was published by the Treasury in July 2002, the financial arrangement between the UK and the Administration in Scotland follows the conventions for Scotland before the devolution settlement. (Scotland Office, online.) ...read more.

each of the devolved administrations hoping that it could prevent and minimise any miscommunication with regard to the use of the formula. (Heald, 2001) The main reason for choosing the Barnett formula is because it is an "anti-rounding up device" combined with a "convergence formula". The Treasury prefers to use an anti-rounding up device because of its negative experience with the bias Goschen proportion with the Scottish departments (Mitchell, 2006). Prior to the devolution, the Goschen formula was used as a benchmark when negotiating for the funds allocation. For example: Scotland could debate on receiving at least if not more than the 11/80 of that in Wales for the reason that Scotland has more public schools and teachers to finance. Further, using the Goschen proportion as a benchmark could enable a territory to make a special claim for a particular service that the territory has chosen to negotiate. (McLean, 2003) Since the Groschen formula serves as a benchmark for further negotiation with regard to the budget allocation in each territory, debates coming from different territories continuously arises leading to serious problems on the part of the Treasury. In line with this problem, the use of the Barnett formula simplifies the whole bargaining process for of the Treasury by legally allowing the distribution of a block grant rather than on a programme-by-programme percentage increase. The Treasury also prefers the use of a convergence formula since it works on the increments in the public spending instead of the usual absolute public spending. The benefit of applying incremental solution in the computation for the public spending in each territory is that it minimises a bias allocation of funds for the public expenditure in each devolved area. For example: If England decided to increase spending on its domestic services by a certain amount, Scotland, Wales and Northern Ireland should also receive an equal amount to the spending of England which will be added up to the block grant of each territory in proportion to the ratio between the England's population and the population of each devolved territory. ...read more.

In line with this, there is really a need to develop a new formula that could minimise and prevent the bias distribution of the UK government funds. Conclusion The government has made an effort to solve the problems related to the financial arrangements in the UK since devolution in 1999. The public expenditures of devolved territories such as Scotland have been totally distorted because of the application of the Goschen and Barnett formulae. Evidence shows that the local authorities practice a bias judgement with regard to the allocation of funds among the English regions such that London, in particular, receives significantly more funds than that of Scotland. The implementation of the Barnett formula since devolution is more beneficial on for Scotland as compared with the use of the Goschen formula. Based on the HM Treasury report during the fiscal year 2006/2007, Scotland alone has been receiving a grant from the UK Government more than the amount of financial support being received by England and Wales. Although the use of the Barnett formula is beneficial to Scotland, this tool will never be useful in areas related to taxation, unemployment rates, and the health needs of the people in each territory. According to the HM Treasury, Wales had a requirement for greater government funds to solve the social and economic issues compared to the needs of Scotland. (HM Treasury, 1978) However, with the application of the Barnett formula, Scotland was to be given a higher monetary than that of Wales. Up to the present time, a perfect formula that can resolve the major concerns of the devolved territories with regard to an equal distribution of Government funding has still yet to be found. In line with this, several studies have been made on how to solve the financial distribution problem throughout the devolved territories in the UK. Perhaps in years to come, a better financial tool will be developed to solve the unequal allocation of funds. ...read more.