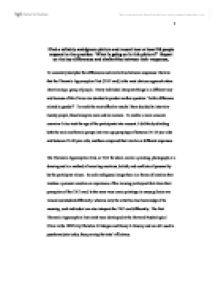 Find a suitably ambiguous picture and record how at least 20 people respond to the question: 'What is going on in this picture

Find a suitably ambiguous picture and record how at least 20 people respond to the question: 'What is going on in this picture?' Report on the key differences and similarities between their responses. To accurately decipher the differences and similarities between responses I believe that the Thematic Apperception Test (TAT card) is the most obvious approach when interviewing a group of people. Every individual interprets things in a different way and because of this I have also decided to ponder another question: 'Is this difference related to gender?' To reach the most effective results I have decided to interview twenty people, these being ten men and ten women. To enable a more accurate overview I also took the age of the participants into account. I did this by dividing both the male and female groups into two age groupings of between 16-25 year olds and between 25-40 year olds, and then compared their similar or different responses. The Thematic Apperception Test, or TAT for short, can be a painting, photograph or a drawing and is a method of revealing emotions, beliefs, and conflicts of personality by the participant viewer. In each ambiguous image there is a theme of emotion that invokes a personal emotion or experience of the viewing participant that alters their perception of the TAT card. ...read more.

Although this is an obvious assumption to make it does indicate that our interpretations of everyday life affect our judgement towards our situational perceptions. Another intriguing male response was that of a murder scene. The male participant in question envisaged a struggle between the characters taking place leaving the female dead at the hands of the male. He said that this was indicated by both the limp looking arm of the female dangling over the side of the bed and by the males' hand to his forehead indicating remorse of his actions. When I asked why they interpreted it this way the reasons were due to the shirt of the man not being neatly tucked in and the fact that he still had his shoes on (implying that the male had simply killed her without a sexual act taking place). I believe that the young male grouping is showing a stereotypical response that signifies a domineering and sexual interpretation. The females of the 16-25 year old age group that I interviewed had a different interpretation of the image. Their main consensus was that the man was grieving for the loss of his dead or dying spouse. One female interpretation was that the man had been keeping a bedside vigil over the dying woman by sitting in the chair and now that she had passed away, indicated by the posture of ...read more.

From the results of this Thematic Apperception Test it is clear that 'special value resides in its power to expose the underlying inhibited tendencies which the subject (or inquirer) is not willing to admit, or can not admit because he is unconscious of them' (Murray, http://www.aber.ac.uk/media/Modules/MC10220/visper04.html) Although I was unable to carry out a similar eye movement test, as did Hess (1965), in my investigation I did find that the different participant genders would mention the opposite gender of the image. Unfortunately I found this too inconclusive to properly record, as the difference was insignificantly minor. I have found there to be numerous possibilities of interpretation of regarding the gender, age and personal history of the participants. There were similarities in the interpretations by both male and female observers but this only seemed to occur within the older age group as opposed to the younger men and women where there were many differences. This shows that my earlier prediction of gender stereotyping was correct but also showed that the age of each participant was a deciding factor. My study has found that age combined with gender shows that men and women can perceive things very differently as noted by Vernon, 'object identification differs between men and women' (Vernon 1971: 633). ...read more.