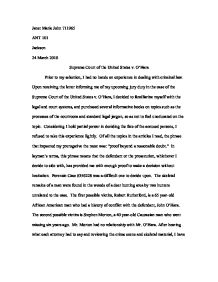 Janet Marie John 711965 ANT 101 Jackson 24 March 2010 Supreme Court of the United States v. O'Hara Prior to my selection, I had no hands on experience in dealing with criminal law. Upon receiving the letter informing me of my upcoming jury duty in the case of the Supreme Court of the United States v. O'Hara, I decided to familiarize myself with the legal and court systems, and purchased several informative books on topics such as the processes of the courtroom and standard legal jargon, so as not to feel uneducated on the topic. Considering I hold partial power in deciding the fate of the accused persons, I refused to take this experience lightly. Of all the topics in the articles I read, the phrase that impacted my prerogative the most was: "proof beyond a reasonable doubt." In layman's terms, this phrase means that the defendant or the prosecution, whichever I decide to side with, has provided me with enough proof to make a decision without hesitation. Forensic Case #356228 was a difficult one to decide upon. The skeletal remains of a man were found in the woods of a deer hunting area by two hunters unrelated to the case. The first possible victim, Robert Rutherford, is a 65 year-old African American man who had a history of conflict with the defendant, John O'Hara. The second possible victim is Stephen Morton, a 40 year-old Caucasian man who went missing six years ago. ...read more.

Looking closer at the skeletal remains is the only way to make the answer clear for a solid judgment as a juror. From the skeleton of the deer, a skull, one antler, and both femurs were recovered. Examiners got even luckier with the human body. They were able to find the skull, both upper arm bones, both thigh bones, the left lower leg, an assortment of cervical, thoracic and lumbar vertebrae, a forearm with gnaw marks, various ribs, a pelvis, some wrist bones, several toe bones, and both shoulder blades. Examiners were able to reconstruct the body to form the basic outline of its original form. To justifiably account for the gnaw marks present on the forearm, I will argue those to be the result of an animal in search for food after the body had already begun to decayed. Also, to account for the irregular break in one of the ribs found, it is probable that this was the result of the injury that led to the death of the victim. The latter statement will be further analyzed later. Judging from the skeletal remains, I have been able to identify who the body belongs to. Looking further into possible sex, age, race, and stature, I have found the body to be that of Mr. Robert Rutherford. Several factual elements have led to this conclusion. As both possible victims are male, the sex of the skeleton was assumed to be in concordance, but nothing should ever be merely assumed. ...read more.

This description fits our first possible victim, Mr. Rutherford, perfectly. However, determining which man the body belonged to was only half of my job. Once I determined that fact, I also had to determine whether or not Mr. O'Hara was guilty of putting Mr. Rutherford in his current condition. My overall outlook is to expect the best out if people, so the common phrase "innocent until proven guilty" sticks out at me in this situation. This viewpoint has helped me to be open-minded. Although the two men did have conflict over hunting grounds, we cannot just assume that Mr. O'Hara would kill Mr. Rutherford over these conflicts. Looking solely at the remnants of the crime scene, there is absolutely no evidence proving that Mr. O'Hara, or anyone for that matter, murdered Mr. Rutherford. I have come to the conclusion that, because he was an older man with several health issues, Mr. Rutherford was in poor health and had been carrying alcohol with him while hunting. As apparent by pictures of the crime scene, the land was not cleared, leaving room to argue that an older man may find the terrain difficult or tiring to navigate. He could have simply tripped and was injured by something lying in his path, but this is just one possibility out of many. Either way, I would rule his death as accidental and uncaused by the defendant. Because no solid proof of murder exists, "beyond a reasonable doubt," I will be casting the vote of not guilty in the case of Supreme Court of the United States v. O'Hara, Forensic Case #356228. ...read more.