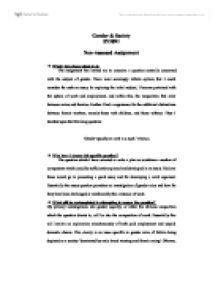 'Gender equality in work is a myth' - Discuss.

Gender & Society SY2891 Non-Assessed Assignment --> What I have been asked to do The assignment has invited me to conceive a question centrally concerned with the subject of gender. There were seemingly infinite options that I could consider for such an essay. In exploring the initial subject, I became pertained with the sphere of work and employment, and within this, the inequalities that exist between males and females. Further I had a cognisance for the additional distinctions between female workers, namely those with children, and those without. Thus I decided upon the following question: 'Gender equality in work is a myth.' Discuss. --> Why have I chosen this specific question? The question which I have selected to write a plan on combines a number of components which could be sufficiently explored and developed in an essay. I believe these would go to presenting a good essay and for developing a solid argument. Essentially the essay question provokes an investigation of gender roles and how far they have been challenged or reinforced by the existence of work. --> What will be contemplated in attempting to answer the question? My primary investigations into gender equality, or rather the obvious inequalities which the question directs to, will be into the composition of work. Essentially this will involve an exploration simultaneously of both paid employment and unpaid domestic chores. This clearly is an issue specific to gender roles of Britain being depicted as a society 'dominated by male bread winning and female caring' (Warren, 2001, 548). ...read more.

Thus seeing the 'female as caring' (Warren, 2001, 548), as most other chores are shared equally between husband and wife, or it is mainly the woman. I would expect to conclude that the woman being principal in household chores will inextricably link to the further predominant role of a woman being employed in part-time work. However this shall form the latter part of the essay, and I shall now concentrate on the evident wages gap between men and women, which is further hindered by women being mothers. --> Consideration: the gender disparity in earnings Headlines at the turn of the twenty-first century informed of the 'Raw deal for women' (Ward, 2000a, 7) and 'Female forfeit' (Ward, 2000b, 13). Thus there is evidence showing that women are disadvantaged in the labour market, and this is regardless of educational qualifications and employment breaks for women who choose to have children. A study conducted by the London School of Economics in 2000 showed that there was a distinct pay gap between men and women. This is an alarming study due to legislation implemented in the 1970s to try and curb this problem. Abercrombie and Warde are justified in their belief that the 'implementation of the Equal Pay Act between 1970 and 1975 reduced the wages gap little' (Abercrombie and Warde, 1998, 195). The table below will highlight the problems women face in employment in the twenty-first century. ...read more.

Implicated in this argument is the unpaid work that women are engaged in. Such that 'an argument has been that many women with family responsibilities have no choice, they are forced into jobs of short hours,' (Warren, 2000, 1). Thus a patriarchal society that serves to reinforce the male as the dominant breadwinner further coerces the woman into a position that is reliant on the man being the main earner due to lack of welfare provision for mothers who have to work. This is manifestly a structural inequality in society that simultaneously advances the dominance of men, while impoverishing the position of women. In the form of the essay I would inextricably link this to each of the points explored in the essay, and this would lead me to draw my conclusions. --> Drawing my conclusions 4 Pulling the strands of the essay together, I would seek to present my evidence in a summarised and coherent form. In answering the question, I would expect to find that there is a distinct lack of gender equality with the dual pillars of paid and unpaid work. This would further lead to me to draw attention to the pre-eminence of Britain being a patriarchal society. Of course, this plan has had a focus on a heterosexual coupling probably in the working class or lower middle class. Further derivations from such an essay could involve gender inequalities at the other end of the spectrum: a single woman struggling to smash through the glass ceiling. ...read more.