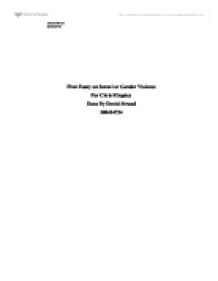 Gender or sexual violence, can it be stopped or how can it be prevented?

Final Essay on Sexual or Gender Violence For Chris Kingsley Done By Daniel Stroud 200424734 Gender or sexual violence, can it be stopped or how can it be prevented? This forthcoming essay is going to include a number of issues relating to the ongoing battle against sexual or gender related violence in schools, and not just in schools but also in public all over this and other countries. The essay is going to be in argument form with the argument being on the side against gender and sexual violence, in other words the essay is agreeing with articles, which are against sexual or gender violence. Statistics and graphs as well as other authors points of views have been included to increase ones understanding on the subject of sexual and gender violence. To someone who reads about such acts as sexual violence in schools, it would be hard to believe that there would be anyone arguing for more sexual or gender violence. So as an opposing argument, well there just is not one to put forward. First one must deal with the issue of what sexual and gender violence is. Gender refers differences between men and women, in other words masculine and feminine compared to male and female. So gender violence is violence that is aimed at women or men because of their sex. Gender violence normally always affects one sex more than another. ...read more.

* 77% of all rapes are committed by someone known to the victim. That means that more than 7 in 10 sexual assault victims knew their attacker. * For college students, the numbers are even higher: 84% of women surveyed knew their attacker and more than half of these assaults happened on dates. Statistics are from the CALCASA 2001 Research on Rape and Violence Report (http://www-unix.oit.umass.edu/~jrw/cs120project.html) Now that one has seen statistics and definitions as to what and who sexual and gender violence is related to. Let us now look at the sexual and gender violence that is in schools all over the world. Through research done by Nan D. Stein, Ed.D. Senior Research Scientist at Wellesley College Centre for Research on Women, and Co-Director, National Violence Against Women Prevention Research Center. He has come to the conclusion that schools may well be the training grounds for sexual and gender violence. He goes on to say that sexual harassment in schools has grown out of proportion, and yet when the educators try to come up with ideas to curb violence they often overlook such things as sexual and gender violence. And the horrifying thing is that this still occurs even with the recognition of the problems of teen dating violence, date rape, battering and domestic violence. And when these are recognised staff member are asked to give presentations to the class to make them aware that such things are happening. ...read more.

Legal and policy reform that ensure gender equality and legal protection for victims of sexual violence are also important measures to promote equitable gender norms. School and university prevention is another area where work is being done, and most of the work on sexual violence to date has been concentrated on educational prevention, aimed at reducing the physical and psychosocial harm to victims of sexual violence. There appears to be very little work being done on the prevention strategies for the perpetrators. Persons who have been assaulted often seek medical assistance, even when they fail to disclose the violent event. Health staff can provide comprehensive, gender-sensitive health services to victims of sexual assault to manage the physical and mental health consequences of the assault, including pregnancy testing, STD testing and prophylaxis, treatment of injuries, and psychosocial counselling. A gap exists however, between the service needs experienced by victims of sexual violence, and the existing level of health services provided in most countries in such cases. There is a need however to strengthen the capacity of the health sector to respond to persons who experienced sexual violence and need help dealing with it. (http://www.who.int/violence_injury_prevention/violence/interpersonal/ip3/en/) In closing, what can be done to help victims of sexual harassment, assault, abuse etc, is the important question on everyone's mind. But as one can clearly see there are many measures being taken to try and make this, and other countries a safer place for men and especially women to live in. There is hope, and one day soon, maybe we will reach it. ...read more.